Hurry Down Sunshine: A Father's Story of Love and Madness (Paperback) 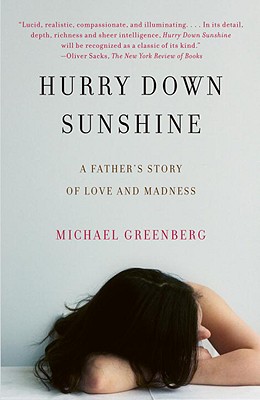 By Michael Greenberg
$15.95
This book is out of stock indefinitely, unable to order at this time.

“A haunting memoir of a father and wife dealing with a daughter's sudden psychotic breakdown. Filled with brilliant imagery and the strain her illness brought to her family, this is an important book that will bring some element of understanding to such painful situations.”
— Amy Ellis, Front Street Books, Alpine, TX

A TIME BEST BOOK OF THE YEAR

Hurry Down Sunshine is an extraordinary family story and a memoir of exceptional power. In it, Michael Greenberg recounts in vivid detail the remarkable summer when, at the age of fifteen, his daughter was struck mad. It begins with Sally's sudden visionary crack-up on the streets of Greenwich Village, and continues, among other places, in the out-of-time world of a Manhattan psychiatric ward during the city's most sweltering months. It is a tale of a family broken open, then painstakingly, movingly stitched together again.

Among Greenberg's unforgettable cast of characters are an unconventional psychiatrist, an Orthodox Jewish patient, a manic Classics professor, a movie producer, and a landlord with literary aspirations. Unsentimental, nuanced, and deeply humane, Hurry Down Sunshine is essential reading in the literature of affliction alongside classics such as Girl, Interrupted and An Unquiet Mind.

A native New Yorker, Michael Greenberg is a columnist for the Times Literary Supplement (London), where his wide-ranging essays have been appearing since 2003. His fiction, criticism, and travel pieces have been published in such varied places as O, The Oprah Magazine, Bomb, The Village Voice, and The New York Review of Books. He lives in New York with his wife and son.

"Lucid, realistic, compassionate, and illuminating.... In its detail, depth, richness and sheer intelligence, Hurry Down Sunshine will be recognized as a classic of its kind." —Oliver Sacks, The New York Review of Books

“[Hurry Down Sunshine] is about tenacity and tenderness, feeling helpless but being present, about cracking up, then finding the wherewithal to glue the jagged pieces of your mind back together again. But mostly it's about love.”  —Oprah Winfrey, in her letter to readers in O, The Oprah Magazine

“Triumphant. . . . Greenberg renders the details of his daughter's breakdown with lyrical precision.” —The Washington Post

“There is a dancing, dazzling siren seductress at the heart of this book and . . . [it is] madness itself. . . . The startling associative imagery that gives Greenberg's writing its power is like a domesticated version of the madness that nearly carried away his daughter's life.” —Time

“This memoir of a family crisis captures the grief that transformed their lives . . . readers come away with a sense of the intractable nature of psychosis and the courage it requires for patients like Sally, whose struggles continue, merely to live.” —People

“[Hurry Down Sunshine’s] fundamental strength arises from Greenberg’ s insistence on facing the demons that held his girl in their dark thrall. Sally’ s descent and tentative return form the map for this story; Greenberg’s courage lies in his willingness to follow her down that terrible path, no matter where it leads.” —Bookforum

“Touching, warmly intimate, and unsparing. . . . Like the best fiction, this memoir has transcended the merely particular and eccentric to constitute a kind of hard-won art.” —Joyce Carol Oates, Times Literary Supplement (London)

“Beautifully written. . . . The literary precedents Greenberg turns to are Joyce and Robert Lowell. . . . There are echoes of Virginia Woolf, too. . . . Sally’s psychiatrist calls . . . the mind falling in love with its delusions . . . ‘the evil seduction’. But Greenberg can understand the impulse, and it’s this that gives Hurry Down Sunshine such power.” —The Guardian (London)

“A story of almost mythic power. . . . A compelling narrative about how one family coped with madness. . . . Tough and lyrical. . . . Greenberg brings a true writer’s sensibility to every line.”
—The Times (London)

“[Greenberg] writes beautifully. . . . [He is] gratefully and minutely observant. . . . His cast captivates.” —The Observer (London)

“The psychotic break of his fifteen-year-old daughter is the grit around which Michael Greenberg forms the pearl that is Hurry Down Sunshine. It is a brilliant, taut, entirely original study of a suffering child and a family and marriage under siege.” –Janet Malcolm, author of The Silent Woman: Sylvia Plath & Ted Hughes and The Journalist and the Murderer

“One of the most gripping and disturbingly honest books I have ever read. The courage Michael Greenberg shows in narrating the story of his adolescent daughter’s descent into psychosis is matched by his acute understanding of how alone each of us is, sane or manic, in our processing of reality and our attempts to get others to appreciate what seems important to us. This is a remarkable memoir.” —Phillip Lopate, author of Two Marriages and Waterfront: A Journey Around Manhattan