The Enchanted Wanderer: And Other Stories (Vintage Classics) (Paperback) 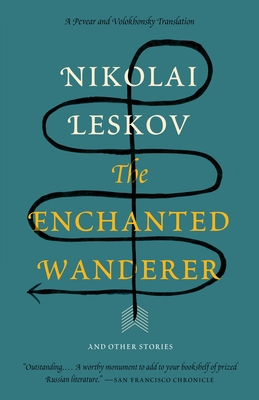 Nikolai Leskov's writing exploded the conventions of nineteenth-century Russian fiction. Here is the other Russia, mythical and untamed: an uneasy synthesis of Orthodoxy and Old Believers, a land populated by soldiers and monks, serfs and princes, Tartars and gypsies—a vast country brimming with the promise of magic.

These seventeen tales, some rooted in the oral tradition, others cast as sophisticated anecdotes, are all told in the voices of storytellers addressing their audience—allowing us, as readers, to join a group of listeners. Innovative in form and rich in wordplay, the narratives unfurl in startlingly modern ways. The great gift of this new translation allows us to hear all the nuances of Leskov’s brilliant language.

Nikolai Leskov was born in 1831 in the village of Gorokhovo in Russia. He began his writing career as a journalist living in Kiev, and later settled in St. Petersburg, where he published many short stories and novellas, including The Lady Macbeth of Mtsensk (1865), The Sealed Angel (1873), The Enchanted Wanderer (1873), and Lefty (1882). He died in 1895.

Together, Richard Pevear and Larissa Volokhonsky have translated works by Tolstoy, Dostoevsky, Chekhov, Gogol, Bulgakov, and Pasternak. They were twice awarded the PEN/Book-of-the-Month Club Translation Prize (for their versions of Dostoevsky’s The Brothers Karamazov and Tolstoy’s Anna Karenina), and their translation of Dostoevsky’s Demons was one of three nominees for the same prize. They are married and live in France.

“Outstanding. . . . A worthy monument to add to your bookshelf of prized Russian literature.” —San Francisco Chronicle

“Vibrantly translated. . . . Thanks to this delicious new collection, the time is once again ripe for Leskov’s resurgence.” —The New York Times Book Review

“Stories as strong as fables and crazy as life.” —Alice Munro

“We can recognize this Leskov, in English, as a king among Russian storytellers. . . . It is a testament both to his own resilience and to the unmatched talent of his translators that he has arrived in such brilliant color.” —The Quarterly Conversation

“[A] forgotten genius. . . . Leskov’s genius lies in the modesty of his narrators, their helplessness before the art of narrative.” —The Daily Beast

“Leskov remains pungently and overpoweringly Russian. . . . Leskov was in many regards—if not in his language—a very modern writer, being, together with Zola and Dickens, among the very greatest journalist-novelists of the nineteenth century.” —The Times Literary Supplement (London)

“Intensely Russian. . . . Rambling and yet engrossing. . . . Anyone interested in the last decades of Russia before the Bolshevik Revolution will be happy to be led into its vast expanses and depths by such an intelligent and always interested guide.” —The Scotsman

“Russians have revered Nikolai Leskov’s artistry for over a century, but he is little known in the West because the story-telling voices from deep in the Russian heartland that he skillfully ventriloquizes in his tales are notoriously difficult to translate. Pevear and Volokhonsky’s collection of Leskov’s best-known works bears all the hallmarks of their previous successes—absolute faithfulness to the author’s meaning and manner, ingenious finds and formulations, and fluency in English.” —Vladimir Alexandrov, B. E. Bensinger Professor of Slavic Languages and Literatures, Yale University

“Without Leskov there would be no Bulgakov, no Chekhov, but also no García Márquez and Julio Cortázar. . . . Leskov is the essential storyteller: he does not portray life, he creates it in all its wonder and terror and magic.” —Alberto Manguel

“Nikolai Leskov’s absence from classic Russian literature lists must end now! If you like Russian, and you like funny, you will love Leskov.” —Gary Shteyngart

“Leskov was celebrated in his own time by luminaries no less than Tolstoy and Chekhov. . . . Seasoned with equal parts humor and social commentary, Leskov’s stories prove gentle but infectious portraits of the sorrow and joys of Russian peasantry.” —Publishers Weekly (starred)

“A welcome new translation of Leskov’s grand metaphysical romp, a hallmark of nineteenth-century Russian literature. . . . A literate delight, and a book to look forward to reading more than once.” —Kirkus Reviews

“[Pevear and Volokhonsky] have managed a formidable job, maintaining the master’s voice and allowing these essential Russian stories to retain a distinct nineteenth-century flavor while keeping them fresh and alive for the modern reader.” —BookPage