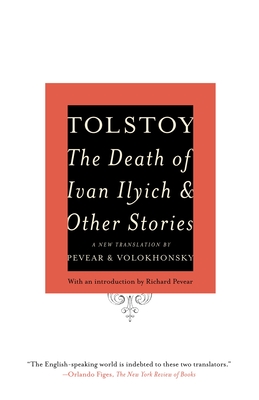 A vibrant translation of Tolstoy’s most important short fiction by the award-winning translators of War and Peace.

Here are eleven masterful stories from the mature author, some autobiographical, others moral parables, and all told with the evocative power that was Tolstoy’s alone.  They include “The Prisoner of the Caucasus,” inspired by Tolstoy's own experiences as a soldier in the Chechen War, “Hadji Murat,” the novella Harold Bloom called “the best story in the world,” “The Devil,” a fascinating tale of sexual obsession, and the celebrated “The Death of Ivan Ilyich,” an intense and moving examination of death and the possibilities of redemption.

Pevear and Volokhonsky’s translation captures the richness, immediacy, and multiplicity of Tolstoy’s language, and reveals the author as a passionate moral guide, an unflinching seeker of truth, and ultimately, a creator of enduring and universal art.

Count Leo Nikolaevich Tolstoy displayed an extraordinary duality of character in a life filled with deep contradictions. He was born to an artistocratic Russian family on Sept. 9, 1828. His parents died when he was young, and he was raised by several female relatives. In 1844 he entered the University of Kazan, remaining there only three years. At the age of 23, Tolstoy joined the Russian Army and fought in the Crimean War. While still in the service, his first published story appeared, a largely autobiographical work called Childhood (1852). Tolstoy returned to his estate in 1861 and and established a school for peasant children there. In 1862, he married Sofia Behrs and gradually abandoned his involvement with the school. The next fifteen years he devoted to managing the estate, raising his and Sofia's large family, and writing his two major works, War and Peace (1865-67) and Anna Karenina (1875-77). During the latter part of this fifteen-year period, Tolstoy found himself growing increasingly disenchanted with the teachings of the Russian Orthodox Church. In the ensuing years, Tolstoy formulated for himself a new Christian ideal, the central creed of which involved nonresistance to evil; he also preached against the corrupt evil of the Russian state, of the need for ending all violence, and of the moral perfectibility of man. He continued to write voluminously, primarily nonfiction, but also other works, such as The Death of Ivan Ilyich (1886). In 1910, still unable to reconcile the differences in the lives led by the aristocracy and the simpler existence he craved, Tolstoy left the estate. He soon fell ill and was found dead on a cot in a remote railway station. He was buried on his estate at Yasnaya Pulyana.

“Excellent. . . . The duo has managed to convey the rather simple elegance of Tolstoy’s prose.” —The New Criterion

“[Tolstoy’s] late style is leaner, his forms more spare, but this is also the economy of achieved mastery. He does more with less, and the Tolstoyan sounds, instantly recognizable, are still there. . . . [Pevear and Volokhonsky’s] new version is more flexible, individuated, immediate.” —The Nation

“The Death of Ivan Ilyich and Other Stories is a great collection well translated. As a lover of Tolstoy’s work, one couldn’t ask for more, and I can’t recommend it highly enough.” —André Alexis, The Globe and Mail