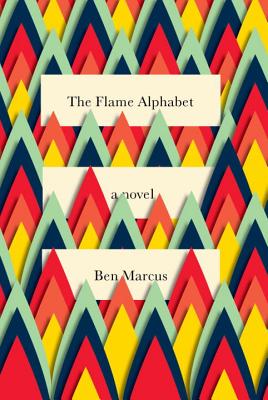 By Ben Marcus
$25.95
This book is out of stock indefinitely, unable to order at this time.

In The Flame Alphabet, the most maniacally gifted writer of our generation delivers a work of heartbreak and horror, a novel about how far we will go, and the sorrows we will endure, in order to protect our families.

A terrible epidemic has struck the country and the sound of children’s speech has become lethal. Radio transmissions from strange sources indicate that people are going into hiding. All Sam and Claire need to do is look around the neighborhood: In the park, parents wither beneath the powerful screams of their children. At night, suburban side streets become routes of shameful escape for fathers trying to get outside the radius of affliction.

With Claire nearing collapse, it seems their only means of survival is to flee from their daughter, Esther, who laughs at her parents’ sickness, unaware that in just a few years she, too, will be susceptible to the language toxicity. But Sam and Claire find it isn’t so easy to leave the daughter they still love, even as they waste away from her malevolent speech. On the eve of their departure, Claire mysteriously disappears, and Sam, determined to find a cure for this new toxic language, presses on alone into a world beyond recognition.

The Flame Alphabet invites the question: What is left of civilization when we lose the ability to communicate with those we love? Both morally engaged and wickedly entertaining, a gripping page-turner as strange as it is moving, this intellectual horror story ensures Ben Marcus’s position in the first rank of American novelists.

BEN MARCUS is the author of three books of fiction: "Notable American Women," "The Father Costume," and "The Age of Wire and String, " and he is the editor of "The Anchor Book of New American Short Stories." His stories have appeared in "Harper's Magazine, The New Yorker, ""The Paris Review, ""McSweeney's, ""Tin House, "and "Conjunctions. "He is the recipient of a Whiting Writers' Award, a National Endowment for the Arts Fellowship in Fiction, and awards from the Creative Capital Foundation and the American Academy of Arts and Letters. He lives in New York City and Maine.

“To people who just want to read a good yarn and who think Ben Marcus is too weird for them, I’d say: Think again . . . The novel can operate on multiple registers: as metaphor, sociology, conventional thriller, and, at bottom, discourse on parenthood and family that is freakishly sad and incredibly good.”
—Fiona Maazel, Book Forum

“There’s something profound about Marcus’s exploration of the power of language and the life-affirming nature of human breathing. He turns both these normally positive ideas on their heads, but that only makes the sound of a loved-one’s voice, the feel of a child’s breath against the skin, seem that much more precious.”
—Tyrone Beason, The Seattle Times

“In the guise of a horror novel (albeit one written by a supremely intelligent literary novelist), Marcus has delivered a subtle meditation on the necessity as well as the drawbacks of human communication . . . in searing, sometimes hallucinatory prose.”
—Doug Childers, Richmond Times-Dispatch

“An apocalyptic nightmare. Its vision is eerie, droll and heartbreaking, both lavishly written and haunting to behold. Language may be killing off the characters that Marcus invented, but his use of language could hardly be more vibrant.”
—Joan Silverman, Portland Press Herald

“Language kills in Marcus’s audacious new work of fiction, a richly allusive look at a world transformed by a new form of illness . . . Biblical in its Old Testament sense of wrath, Marcus’s novel twists America’s quotidian existence into something recognizable yet wholly alien to our experience.”
—Publishers Weekly (starred review and Pick of the Week)

“The Flame Alphabet drags the contemporary novel—kicking, screaming, and foaming at the mouth—back towards the track it should be following. Ben Marcus makes language as toxic as it is seductive— a virus that comes from  much closer to home than we suspected.”
—Tom McCarthy

“Ben Marcus is the rarest kind of writer: a necessary one.  It's become impossible to imagine the literary world—the world itself—without his daring, mind-bending and heartbreaking writing.”
—Jonathan Safran Foer

“Echoes of Ballard’s insanely sane narrators, echoes of Kafka’s terrible gift for metaphor, echoes of David Lynch, William Burroughs, Robert Walser, Bruno Schulz and Mary Shelley: a world of echoes and re-echoes—I mean our world—out of which the sanely insane genius of Ben Marcus somehow manages to wrest something new and unheard of.  And yet as I read The Flame Alphabet, late into the night, feverishly turning the pages, I felt myself, increasingly, in the presence of the classic.”
—Michael Chabon