The Alchemy of Air: A Jewish Genius, a Doomed Tycoon, and the Scientific Discovery That Fed the World but Fueled the Rise of Hit (Hardcover) 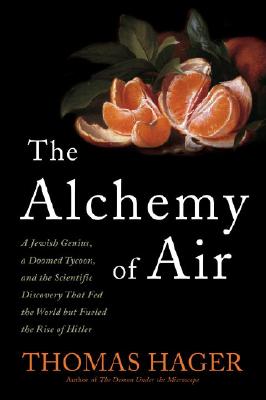 A sweeping history of tragic genius, cutting-edge science, and the discovery that changed billions of lives—including your own.

At the dawn of the twentieth century, humanity was facing global disaster. Mass starvation, long predicted for the fast-growing population, was about to become a reality. A call went out to the world’s scientists to find a solution.
This is the story of the two enormously gifted, fatally flawed men who found it: the brilliant, self-important Fritz Haber and the reclusive, alcoholic Carl Bosch. Together they discovered a way to make bread out of air, built city-sized factories, controlled world markets, and saved millions of lives. Their invention continues to feed us today; without it, more than two billion people would starve.

But their epochal triumph came at a price we are still paying. The Haber-Bosch process was also used to make the gunpowder and high explosives that killed millions during the two world wars. Both men were vilified during their lives; both, disillusioned and disgraced, died tragically. Today we face the other un­intended consequences of their discovery—massive nitrogen pollution and a growing pandemic of obesity.

The Alchemy of Air is the extraordinary, previously untold story of two master scientists who saved the world only to lose everything and of the unforseen results of a discovery that continues to shape our lives in the most fundamental and dramatic of ways.

A veteran science and medical writer, THOMAS HAGER is the author of "The Demon Under the Microscope"; "Force of Nature: The Life of Linus Pauling"; and more than a hundred news and feature articles in "Reader's Digest," "Journal of the American Medical Association," and many other publications.

Named one of the Best Books of 2008 by Kirkus Reviews

"Make[s] the scientific process as suspenseful as a good whodunit."
—Oregonian

"[A] smooth, well-researched book that reads like a fast-paced novel."
—News & Observer (Raleigh)

"This scientific adventure spans two world wars and every cell in your body."
—Discover magazine

“[A] gripping account of the partnership between two Nobel Prize winners whose efforts to save the world had tragic consequences we’re still sifting through today.”
—Plenty magazine

“You will certainly find [Hager’s] story of [Fritz Haber and Carl Bosch] and their discover to be enlightening and entertaining….I know of few other books that provide the general reader with a better portrait of chemistry as the most useful of sciences, and I intend to recommend it to scientists and non-scientists alike.”
—The Journal of Chemical Education

“Many discoveries and inventions are touted as history-changing. But as Thomas Hager admirably proves in his new book, The Alchemy of Air, Fritz Haber and Carl Bosch not only changed history, they made much of recent human history possible. As Hager solemnly notes in his introduction, ‘the discovery described in this book is keeping alive nearly half the people on earth.’ ….As with almost all technological advancement, however, there is a downside. The synthetic Haber-Bosch nitrogen, which now makes up about half the nitrogen in every human body, also fueled the weapons of the world wars and created a nitrogen-rich environment that is having a huge impact on Earth, from lush vegetative growth to dead zones in the oceans. Thanks to two visionary and troubled scientists, we are all now, in Hager’s words, ‘creatures of the air,’ dependent for our very existence on a process whose consequences we don’t completely understand.”
—BookPage

A fast-paced account of the early-20th-century quest to develop synthetic fertilizer. Today hundreds of factories convert atmospheric nitrogen to ammonia in order to manufacture the artificial fertilizers that make modern-day agricultural yields possible. They are based on the technological advance known as the Haber-Bosch process, developed prior to World War I by the German chemists and Nobel laureates Fritz Haber (1868–1934) and Carl Bosch (1874–1940). Hager (The Demon Under the Microscope: From Battlefield Hospitals to Nazi Labs, One Doctor’s Heroic Search for the World’s First Miracle Drug, 2006, etc.) offers a superb narrative of these brilliant men and their scientific discovery. Around the turn of the century, the world faced a shortage of the fixed nitrogen needed to provide food for a growing population. Hager sets the stage by describing the world’s reliance in the 19th century on nitrates from Peru and Chile that could be used as natural fertilizer or to make gunpowder, and finds plenty of human drama in the battles to control the lucrative international trade. Determined to help end Germany’s dependence on South American nitrates, Bosch and Haber worked at the German chemical company BASF to find a way to convert nitrogen into ammonia. Bosch developed the process, and Haber designed bigger industrial plants. By 1944, the Haber-Bosch factory at Leuna—a primary target for U.S. bombers—occupied three square miles and employed 35,000 workers. The author not only illuminates the scientists’ complex work, but also digs into their personal lives. Bosch, a melancholic with a huge villa in Heidelberg, asked Hitler to spare Jewish scientists for the sake of German chemistry and physics (the Fuhrer replied: “Then we’ll just have to work 100 years without physics and chemistry!”). Haber, a Jew, developed the chlorine gas used in World War I, sought a way to extract gold from the oceans to pay off German war reparations and conducted research that led to the development of the Zyklon B gas used in Nazi death camps. Science writing of the first order.
—Kirkus Reviews, starred review