The Siege of Mecca: The 1979 Uprising at Islam's Holiest Shrine (Paperback) 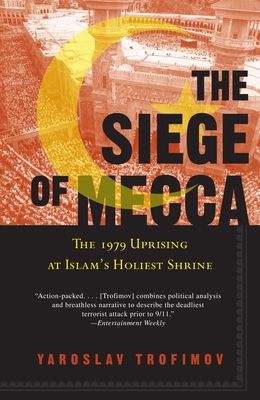 In The Siege of Mecca, acclaimed journalist Yaroslav Trofimov pulls back the curtain on a thrilling, pivotal, and overlooked episode of modern history, examining its repercussions on the Middle East and the world.

On November 20, 1979, worldwide attention was focused on Tehran, where the Iranian hostage crisis was entering its third week. That same morning, gunmen stunned the world by seizing the Grand Mosque in Mecca, creating a siege that trapped 100,000 people and lasted two weeks, inflaming Muslim rage against the United States and causing hundreds of deaths. But in the days before CNN and Al Jazeera, the press barely took notice. Trofimov interviews for the first time scores of direct participants in the siege, and draws upon hundreds of newly declassified documents. With the pacing, detail, and suspense of a real-life thriller, The Siege of Mecca reveals the long-lasting aftereffects of the uprising and its influence on the world today.

Yaroslav Trofimov, an award-winning foreign correspondent for the Wall Street Journal, has extensively reported from Saudi Arabia and other Muslim countries. He is also the author of Faith atWar: A Journey on the Frontlines of Islam, from Baghdad to Timbuktu.

“Action-packed. . . . [Trofimov] combines political analysis and breathless narrative to describe the deadliest terrorist attack prior to 9/11.” —Entertainment Weekly“Fascinating . . . remarkable. . . . Anyone can read The Siege of Mecca, and everyone should.” —The Washington Post“[The Siege of Mecca] begins with all the menace of a political thriller. . . . Riveting.” —Conde Nast Portfolio“A gripping, highly informed narrative of this momentous event.” —Financial Times