Cruel to Be Kind: The Life and Music of Nick Lowe (Hardcover) 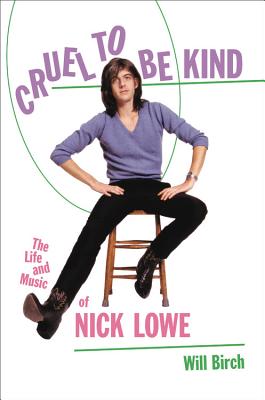 The definitive biography of singer-songwriter Nick Lowe, best-known for "Cruel to Be Kind" and "(What's So Funny 'Bout) Peace, Love, and Understanding"

Described as "Britain's greatest living songwriter," Nick Lowe has made his mark as a pioneer of pub rock, power-pop, and punk rock and as a producer of Elvis Costello, Graham Parker, the Damned, and the Pretenders. He has been a pop star with his bands Brinsley Schwarz and Rockpile, a stepson-in-law to Johnny Cash and June Carter Cash, and is the writer behind hits including "Cruel to Be Kind" and "(What's So Funny 'Bout) Peace, Love, and Understanding." In the past decades, however, he has distinguished himself as an artist who is equally acclaimed for the second act of his career as a tender yet sharp-tongued acoustic balladeer.

Biographer Will Birch, who in addition to being a music writer was a drummer and songwriter with The Records, has known Lowe for over forty years and melds Lowe's gift as a witty raconteur with his own authoritative analysis of Lowe's background and the cultural scenes he exemplifies. Lowe's parallel fame as one of the best interviews in the business will contribute to this first look into his life and work--and likely the closest thing fans will get to an autobiography by this notoriously charming cult figure.
This is not an authorized biography, but Lowe has given it his spiritual blessing and his management and label are fully on board. Cruel to Be Kind will be the colorful yet serious account of one of the world's most talented and admired musicians.

Will Birch is a former drummer and songwriter with the Kursaal Flyers ("Little Does She Know") and The Records ("Starry Eyes"). During the 1980s he moved into record production, working with such acts as Any Trouble, Dr Feelgood, Hollies, Billy Bremner (Rockpile) and the Long Ryders. Throughout the 1990s Will wrote many articles for MOJO and other music magazines. He is the author of No Sleep Till Canvey Island: The Great Pub Rock Revolution, and Ian Dury: The Definitive Biography. He lives near London.

"[An] entertaining biography... [Birch] is casually expert in the way of those
rare music writers who can both play music and write."—The Wall Street Journal

"[Cruel to Be Kind] makes clear that Lowe's contributions to pop music have been many and mighty--and certainly worthy of celebration with a biography...sure to please old-time admirers of an essential rocker."—Kirkus Reviews

"[Will Birch] has written a sunny book about the genial and underappreciated Lowe, following his career through its many incarnations... [A]n enjoyable portrait."—Booklist

"Even the Jesus of Cool needs a St. Paul to spread his gospel and Will Birch is more than up to the task in Cruel to Be Kind. In this intimate, engrossing, and eye-opening biography of Nick Lowe, Birch reveals deep insights into the man and his work. It's a book as elegant as one of Lowe's songs: filled with just the right combination of pathos, humor, and wit, told with an economy of style, and nary a wasted word or sentence. Absolutely brilliant. "—Bob Mehr, author of the New York Times bestseller, TroubleBoys: The True Story of the Replacements

"[A] remarkable book for both its scope and detail and
also its engaging readability...all in all, everything any Nick Lowe fan could
want."—Under the Radar

"A book that's as warm, funny, and affecting as Lowe's best songs."—Pitchfork