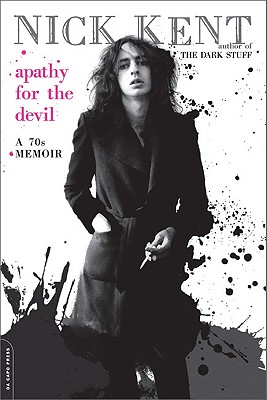 Chronicling Nick Kent's up-close , personal, often harrowing adventures with the Rolling Stones, Lester Bangs, David Bowie, Led Zeppelin, the Sex Pistols, and Chrissie Hynde, among scores of others, Apathy for the Devil is a picaresque memoir that bears witness to the beautiful and the damned of this turbulent decade.

As a college dropout barely out of his teens, Kent's first five interviews were with the MC5, Captain Beefheart, the Grateful Dead, the Stooges, and Lou Reed. But after the excitement and freedom of those early years, his story would come to mirror that of the decade itself, as he slipped into excess and ever-worsening heroin use. Apathy for the Devil is a compelling story of inspiration, success, burn out, and rebirth from a classic wordsmith.

Nick Kent's legendary music journalism defined the golden days of New Musical Express. He has also written for The Face, Sunday Times, Spin, Guardian, and Mojo. He lives in Paris.

“Nearly every page of Apathy contains a scene about which you find yourself muttering out loud, ‘No way,’ and two pages later Kent has fleshed it out so completely that you can almost hear him responding ‘Way’…If you ever wanted to be a fly on the wall to rock ‘n’ roll debauchery, Nick Kent is your man.”

Buffalo News
“Apathy is not some sordid tale of rockstar trainspotting…Kent mattered (and matters still) because he was a great writer, a passionate music love and a man able to tap into the cultural zeitgeist at will. Essential reading for anyone who cares about the rock culture of the ‘70s.”

Glide Magazine, 10/27/10
“[A]nyone who can write a memoir that includes folks like David Bowie, Chrissie Hynde, Lou Reed, and Keith Richards and never comes off as a name-dropper must be telling a pretty good story, wouldn’t you say?”

Milwaukee Shepherd Express, 11/8/10
“[A] compelling page-turner and revealing look at the origins of heavy metal, space rock, glitter and punk.”

Crawdaddy! , 11/24/10
“At once sentimental, salacious, and sometimes shocking slice of essential music memoir…If there is redemption in Kent’s decade of groping in the dark, it’s that he lived to illuminate it; his emotional appreciation of rock’s art prevails over 30 years of chitchat and theory about it…A whistle blower and old-time investigative journalist, Kent fulfills a necessary function as truth teller in the flighty discourse of pop culture. Reporting back from a time when the complicity of the press and the audience converged to become the great rock ‘n’ roll swindle, he’s done his due diligence and given us more than a glimpse behind the curtain.”

Detroit Metrotimes, 11/30/10
“One of the more fascinating reads of the year.”

Metroland, 12/13/10
“Englishman Nick Kent had a front-row seat for the tumult of music that spilled out of the ’60s into the ’70s…He depicts it all with the same honest flair that put him on the map as a journalist in the first place.”

Goldmine, 10/1“A vibrant story, an autobiography that never hits auto-pilot”
Library Journal, 9/24
“A candid, graphic, and fascinating memoir of [Kent’s] 1970s… Amazing true stories on every page… Highly recommended for anyone interested in the dark days of rock and in British rock journalism.” Hartford Advocate, 10/15/10