Religion in the University (Hardcover) 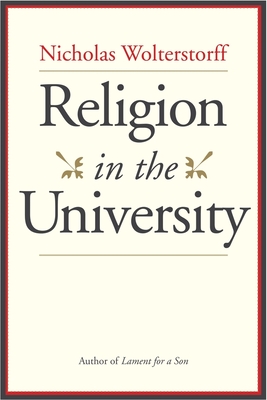 From one of the world’s leading philosophers, this is a powerful defense of religion’s role within the modern university

What is religion’s place within the academy today? Are the perspectives of religious believers acceptable in an academic setting? In this lucid and penetrating essay, Nicholas Wolterstorff ranges from Max Weber and John Locke to Ludwig Wittgenstein and Charles Taylor to argue that religious orientations and voices do have a home in the modern university, and he offers a sketch of what that home should be like.

He documents the remarkable changes have occurred within the academy over the past five decades with regard to how knowledge is understood. During the same period, profound philosophical advancements have also been made in our understanding of religious belief. These shifting ideals, taken together, have created an environment that is more pluralistic than secular. Tapping into larger debates on freedom of expression and intellectual diversity, Wolterstorff believes a scholarly ethic should guard us against becoming, in Weber’s words, “specialists without spirit and sensualists without heart.”

Nicholas Wolterstorff is Noah Porter Professor Emeritus of Philosophical Theology at Yale University. He has written several books, including Lament for a Son and Justice: Rights and Wrongs. He lives in Grand Rapids, MI.

“More secular liberals should consider Yale philosopher Nicholas Wolterstorff’s suggestion in Religion in the University that religious voices be welcomed at institutions of higher learning in much the same way the once-excluded perspectives of feminists and African Americans are now welcomed.”—E.J. Dionne Jr., Washington Post

“Drawing on four decades of experience at Yale University while engaging a range of thinkers including Gadamer, Kuhn, Locke, and Weber, as well as the critical formations of African American studies and feminist theory, Wolterstorff offers a nuanced and philosophically rich perspective on this important issue.”—Corey D.B. Walker, Reading Religion

“With great lucidity and power, distinguished philosopher Nicholas Wolterstorff counters many of the arguments for excluding scholars from the university who are religious believers.”—Richard J. Bernstein, New School for Social Research

“Can and should modern universities be hospitable to religious orientations and voices? This superb book presents the most plausible and readable case for including religion in university life today.”—Miroslav Volf, author of Flourishing: Why We Need Religion in a Globalized Worlddiv>
"With characteristic probing clarity, Nicholas Wolterstorff makes a powerful case for the importance of religious voices and orientations in our pluralist universities. Religion in the University represents a highly accessible contribution to the culture of the academy."—Howard Wettstein, author of The Significance of Religious Experience

“This book asks whether distinctively religious voices merit a place in the intellectual and educational practices of our universities. Wolterstorff’s answer, which is a qualified yes, comes with reasons and distinctions that will now have to be considered by anyone discussing the question. The argument’s implications actually reach far beyond religion to many other respects in which someone’s perspective can be distinctive.”—Jeffrey Stout, author of Democracy and Tradition