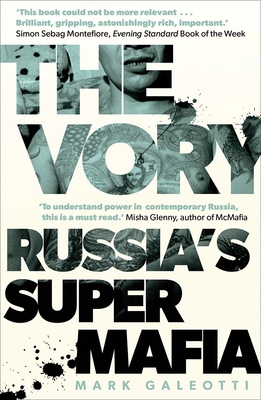 The first English-language book to document the men who emerged from the gulags to become Russia’s much-feared crime class: the vory v zakone

Mark Galeotti is the go-to expert on organized crime in Russia, consulted by governments and police around the world. Now, Western readers can explore the fascinating history of the vory v zakone, a group that has survived and thrived amid the changes brought on by Stalinism, the Cold War, the Afghan War, and the end of the Soviet experiment.

The vory—as the Russian mafia is also known—was born early in the twentieth century, largely in the Gulags and criminal camps, where they developed their unique culture. Identified by their signature tattoos, members abided by the thieves’ code, a strict system that forbade all paid employment and cooperation with law enforcement and the state. Based on two decades of on-the-ground research, Galeotti’s captivating study details the vory’s journey to power from their early days to their adaptation to modern-day Russia’s free-wheeling oligarchy and global opportunities beyond.

Mark Galeotti is a senior researcher at the Institute of International Relations, Prague. An expert and prolific author on transnational crime and Russian security affairs, he has also advised the British Foreign Office and many government and law enforcement agencies in Europe and North America.

“This book could not be more relevant. . . brilliant, gripping, astonishingly rich. . . filled with flamboyant gangsters, devious rackets, vicious hits, secret policemen, Kremlin leaders and criminal slang, at once a true-crime chronicle, a work of scholarship, an anthropological study, a political history of the fused underworld and upper echelons of Russian power — and essential reading.”—Simon Sebag Montefiore, Evening Standard

“Galeotti, by far the best-informed Western academic writing on the Russian security services today, charts the rich history of the country’s criminal background and the twist of history that saw the vory – “thieves” – suddenly emerge as the victor’s in Russia’s chaotic experiment with capitalism.”—Owen Matthews, TLS

“Mark Galeotti makes a convincing case. . . With the West reassessing its decisions to allow Russian oligarchs – many of whom made money by less than honest means – free rein in its capital cities, this book could not be timelier.”—Matthew Partridge, Money Week

“You’d be hard pressed to find a more exhaustive and compelling guide to the confluence of state and organised crime in Russia than this history of thievery that stretches back to the underworld’s pre-revolutionary roots.”—Alasdair Lees, Independent

“Mark Galeotti’s study of Russian organised crime, the product of three decades of academic research and consultancy work, is more than timely. In these days of ever more bizarre Russian attacks, it reads like the essential companion to a bewildering and aggressive new world. . .”—Charlotte Hobson, Spectator

“A fascinating look at Russia’s super mafia and their links to Putin’s secret services. . . . The book could not be more relevant in the midst of global recriminations—and a new round of American sanctions—against Russia.”—Matthew Campbell, Sunday Times (London)

“Adds vital texture to the description of Russia as a kleptocracy. . . The Vory is a timely, readable and important text for anyone thinking of ways to restrict Russian influence over the west and to punish Russia’s leadership for its crimes.”—Oliver Bullough, Observer New Review

“Many viewers who watched McMafia must have wondered if Russian organised crime is as ruthless and pervasive as the TV series suggested. Mark Galeotti’s indispensable book adds plenty of real-life nuance to that fictional screenplay, and nobody reading it will be in any doubt of the seriousness of the overlap between Russian spooks and crooks at home and abroad.”—Edward Lucas, the Times

“The Vory – meaning The Thieves – is a colourful and comprehensive guide to the intersection of crime and politics in Russia.”—The Economist

“An expansive historical overview of organized crime in Russia from the 18th century to the present. . . . a cogent and accessible history that anyone interested in organized crime in general, and the Russian variety in particular, will want to pick up.”—Publishers Weekly

“A well-researched, in-depth look at the history of organized crime in Russia. Students of crime and Russian history will find this book to be interesting and illuminating.”—Paul Davis, The Washington Times

“Among the contemporary developments is the globalization of Russian organized crime, or what has been more popularly labeled as the Russian mafia. The latter is the subject of Mark Galeotti’s new book, and there are few if any more qualified than he to take up that subject.”—James Finckenauer, Criminal Law and Criminal Justice Books

Shortlisted for the Pushkin House Prize 2019

"To understand power in contemporary Russia, this is a must read."—Misha Glenny, author of McMafia

"Galeotti lays bare the lattices of power and influence between official Russia and its criminal organizations. This is the best guide to understanding the workings of the Kremlin since Mario Puzo's The Godfather."—Toomas Hendrik Ilves, Former President of Estonia

“Gritty, historically grounded and superbly readable, this is an essential work by one of the most knowledgeable and dispassionate observers of contemporary Russia.”—Rachel Polonsky, author of Molotov's Magic Lantern

"Galeotti writes with wit, clarity and authority about the grimly fascinating, and all-too-important, history of organized crime and its outsize role in shaping contemporary Russian society and government."—Michael Weiss, CNN National Security Analyst

"The culmination of more than twenty-five years of writing on Russian organized crime, Vory is destined to become the standard work on the subject. It is instructive and shocking—and a pleasure to read."—Federico Varese, author of Mafia Life