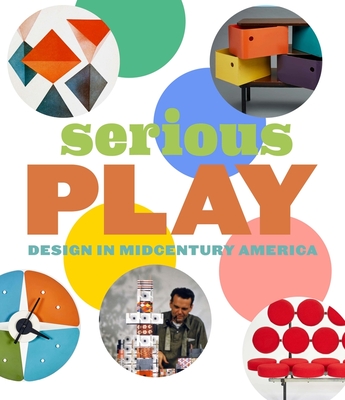 A lively exploration of eclecticism, playfulness, and whimsy in American postwar design, including architecture, graphic design, and product design

This spirited volume shows how postwar designers embraced whimsy and eclecticism in their work, exploring playfulness as an essential construct of modernity. Following World War II, Americans began accumulating more and more goods, spurring a transformation in the field of interior decoration. Storage walls became ubiquitous, often serving as a home’s centerpiece. Designers such as Alexander Girard encouraged homeowners to populate their new shelving units with folk art, as well as unconventional and modern objects, to produce innovative and unexpected juxtapositions within modern architectural settings. Playfulness can be seen in the colorful, child-sized furniture by Charles and Ray Eames, who also produced toys. And in the postwar corporate world, the concept of play is manifested in the influential advertising work of Paul Rand. Set against the backdrop of a society that was experiencing rapid change and high anxiety, Serious Play takes a revelatory look at how many of the country’s leading designers connected with their audience through wit and imagination.

Monica Obniski is Demmer Curator of Twentieth and Twenty-First Century Design at the Milwaukee Art Museum. Darrin Alfred is curator of architecture, design, and graphics at the Denver Art Museum.

“As several contributors . . . point out, ‘many designers . . . rejected a dogmatic modernism and hungered for something beyond rational and utilitarian motives.’ The post-World War II era was marked by an acquisitive appetite, for which designers like Charles and Ray Eames and Alexander Girard devised colorful multitiered storage units, while ceramists like Eva Zeisel created charming table accoutrements to fill them.”—Ann Landi, Wall Street Journal

“The scholarly, yet accessible, catalog, with its zippy, Pop design and multitude of striking illustrations, embodies the topic perfectly. It is fresh in both look and approach.”—Kate Eagan Johnson, Antiques and the Arts Weekly

“After the solemnly revered austerity of prewar modernism and following the hiatus of war, design took a more playful turn. This book is a spirited reminder of those spirited days.”—Stanley Abercrombie, Interior Design Magazine

“The design of this book also suggests the theme of its contents—that of design and play—with bright, colorful design elements. How play influenced mid-20th-century designers is explored in more than 200 illustrations and photographs of designers at work (or play) and examples of their work.”—Maine Antique Digest