Where Song Began: Australia's Birds and How They Changed the World (Hardcover) 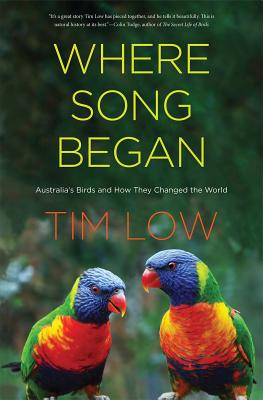 Renowned for its gallery of unusual mammals, Australia is also a land of extraordinary birds. But unlike the mammals, the birds of Australia flew beyond the continent’s boundaries and around the globe many millions of years ago. This eye-opening book tells the dynamic but little-known story of how Australia provided the world with songbirds and parrots, among other bird groups, why Australian birds wield surprising ecological power, how Australia became a major evolutionary center, and why scientific biases have hindered recognition of these discoveries.

From violent, swooping magpies to tool-making cockatoos, Australia’s birds are strikingly different from birds of other lands—often more intelligent and aggressive, often larger and longer-lived. Tim Low, a renowned biologist with a rare storytelling gift, here presents the amazing evolutionary history of Australia’s birds. The story of the birds, it turns out, is inseparable from the story of the continent itself and also the people who inhabit it.

Tim Low is a field biologist, writer, environmental consultant, and wildlife photographer. He is the prize-winning author of six previous books, including Feral Future and The New Nature, and a frequent contributor to Wildlife Australia magazine. He lives in Brisbane, Australia.

"A brilliantly readable book that not only gives Australian birds recognition long overdue, but allows for a fresh understanding of the way the world (and particularly our island continent) functions."—Sean Dooley, Sydney Morning Herald

"Crammed with intriguing facts and ideas. . . . A serious feat of synthesis that few bird observers or natural historians, let alone few authors, would have the knowledge, experience, time or access to academic resources to pull together."—Bob Beale, Sunday Age

"Where Song Began has been credited with turning the map upside down, dashing upon the rocks of our shores the orthodoxy that the world’s cleverest birds must have had their genesis in the northern hemisphere."—Wild magazine

"This book is remarkable on many levels. . . . Low proves to be a master at translating new scientific breakthroughs into a compelling and eminently enjoyable read that will bring a new perspective on Australian birds to readers irrespective of their ornithological background."—Naomi Langmore, Emu

"Where Song Began will be regarded as Tim Low's masterpiece. It is bewilderingly grand in ambition, rich in scientific detail and personal observations, and overflowing with ideas and, indeed, revelations."—Darryl Jones, Wildlife Australia

"Biologist Tim Low is as much a natural with words as he is a scholar of the natural world. He is caught up in the circle of gifted scientists, ecologists and field workers engaged in reshaping our picture of the Australian environment and the creatures it enfolds. Birds are a particular focus of his work, and thought—and it turns out that birds may well hold the most telling clues to the record of the Australian biosphere."—Nicolas Rothwell, The Australian

"One of the best works of natural history to appear all year."—Open Letters Monthly

"Low delves into the weird and wonderful world of Aussie birds with the ease that comes with decades spent in the field. . . . You’ll never look at a songbird the same way again."—Cool Green Science

"Low is to be congratulated for producing this very idea-rich ecological tapestry. I thoroughly enjoyed reading it and found it very thought provoking. The book should be of interest to anyone interested in Australian ecology and birds."—William E. Davis, Jr., Wilson Journal of Ornithology

“Highly enjoyable . . . Where Song Began . . . will enrich the understanding of anyone interested in birds.”—New York Review of Books

"Both informative and provocative, Where Song Began will be enjoyed by all who are interested in birds. It is well written, engaging, and scholarly. A great read."—John M. Marzluff, author of Welcome to Subirdia

"Low’s book weaves research with personal anecdote to unveil the uniqueness and richness of Australia's birds. A fascinating read that will alter how you think about birds and their world."—Craig W. Benkman, University of Wyoming

"Low takes us on a sweeping exploration of the southern hemisphere to reveal where song birds evolved, how they started to sing, and why we should care."—Michael Webster, Cornell Laboratory of Ornithology

"It’s a great story Tim Low has pieced together, and he tells it beautifully. This is natural history at its best. Excellent stuff."—Colin Tudge, author of The Secret Life of Birds and founder of the College for Real Farming and Food Culture (www.collegeforrealfarming.org)

"Tim Low masterfully tells a story not told before. He provides an elegant synthesis of the scientific literature and a panoramic view of how Australia's songbirds originated; the ecological and behavioral forces leading to their uniqueness; and ultimately their far-reaching impacts across the globe."—Scott Edwards, Harvard University