Please Talk to Me: Selected Stories (The Margellos World Republic of Letters) (Paperback) 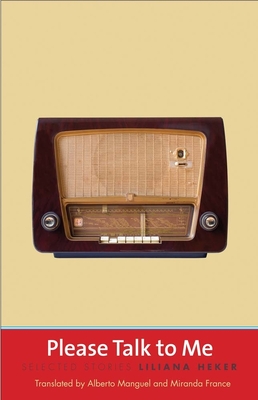 The first short story collection in the Margellos series, from a master of the genre and an irrepressible critic during Argentina’s brutal years of repression

Acclaimed for the gemlike perfection of her short stories, Liliana Heker has repeatedly received major literary awards in her native Argentina. Her work has some of the dark humor of Saki or Roald Dahl, and her versatility and range have earned her a wide, appreciative audience. This expertly translated volume brings to English-language readers the full compass of Heker’s stories, from her earliest published volume (1966) through her most recent (2011).

Heker rejected exile during the dangerous Dirty War years and formed part of a cultural resistance that stood against repression. As a writer, she found in the microcosm of the family and everyday events subtle entry into political, historical, and social issues. Heker’s stories examine the rituals people invent to relate to one another, especially girls and women, and they reveal how the consequences of tiny acts may be enormous. With charm, economy, and a close focus on the intimate, Heker has perfected the art of the glimpse.

Liliana Heker is the author of five volumes of short stories and two novels and the founding editor of two literary magazines widely read in Latin America. During Argentina’s years of violent repression (1976–83), she continued to write and edit left-wing literary journals while also helping to give voice to authors silenced by the regime. She lives in Buenos Aires, Argentina.

Alberto Manguel, an internationally acclaimed author and reader, writes in both English and Spanish.

Miranda France is a translator and writer. Her books include Bad Times in Buenos Aires and Don Quixote’s Delusions.

“…wise and idiosyncratic tales written over the past half-century and originally published over five volumes in Heker’s homeland… The darkly comic tone that prevails throughout Please Talk Me, coupled with element of the improbable or absurd, have won Heker comparisons to Saki, Roald Dahl and Jorge Luis Borges. But for me, the stories of Anton Chekov repeatedly sprang to mind.”— Richard Canning, TLS
— Richard Canning

“[Heker] skillfully condenses relationships into moments where a concealed feeling is revealed, its consequences are long reaching, and there is no turning back for any involved.”—Jackie Trytten, Rain Taxi
— Jackie Trytten