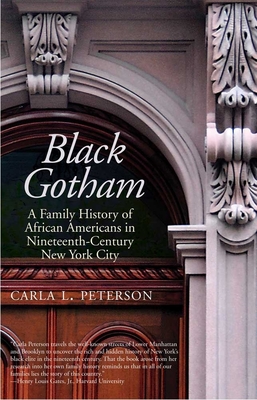 A groundbreaking history of elite black New Yorkers in the nineteenth century, seen through the lens of the author's ancestors

Part detective tale, part social and cultural narrative, Black Gotham is Carla Peterson's riveting account of her quest to reconstruct the lives of her nineteenth-century ancestors. As she shares their stories and those of their friends, neighbors, and business associates, she illuminates the greater history of African-American elites in New York City.

Black Gotham challenges many of the accepted "truths" about African-American history, including the assumption that the phrase "nineteenth-century black Americans" means enslaved people, that "New York state before the Civil War" refers to a place of freedom, and that a black elite did not exist until the twentieth century. Beginning her story in the 1820s, Peterson focuses on the pupils of the Mulberry Street School, the graduates of which went on to become eminent African-American leaders. She traces their political activities as well as their many achievements in trade, business, and the professions against the backdrop of the expansion of scientific racism, the trauma of the Civil War draft riots, and the rise of Jim Crow.

Told in a vivid, fast-paced style, Black Gotham is an important account of the rarely acknowledged achievements of nineteenth-century African Americans and brings to the forefront a vital yet forgotten part of American history and culture.

Carla L. Peterson is professor of English at the University of Maryland, College Park. She is the author of "Doers of the Word": African-American Women Speakers and Writers in the North, 1830–1880.

“Carla Peterson travels the well known streets of Lower Manhattan and Brooklyn to uncover the rich and hidden history of New York's black elite in the nineteenth century. That the book arose from her research into her own family history reminds us that in all of our families lies the story of this country.”—Henry Louis Gates, Jr., Harvard University

“Dr. Peterson took a hard, uphill journey to give greater life to the ‘scraps’ she had about her family in nineteenth-century New York City and returned with a vital gift for all of us. It is a gift that not only offers a portrait of her family in that city but a larger, fairly unknown view of a pre-Harlem integrated society where many blacks were prosperous, enlightened, and thriving. Her book is a precious addition to the paucity of information we have about what blacks have done to make New York City and, indeed, America itself.”—Edward P. Jones, Pulitzer Prize-winning author of The Known World
— Edward P. Jones

"Carla Peterson's Black Gotham presents the best, most detailed portrait of New York City’s nineteenth-century black elite.  Using her own search for her family roots as a thread to pull the reader through the narrative, Peterson provides insight into the work lives, political roles, and personal lives of this small but highly influential group of black New Yorkers."—Leslie M. Harris, Emory University
— Leslie M. Harris

“Carla Peterson's Black Gotham is at once a tender labor of love and a tour de force of historical scholarship; both a romantic journey into her family's past and a clear-eyed restoration of an essential, long-lost element in a people's history. A story of New York, it resounds with implications for all of America. Peterson deserves our rapt attention and our gratitude.”—Arnold Rampersad, Stanford University

“Black Gotham is a wonderful and rare portrait of New York City, told through the lens of a truly remarkable African-American family. Peterson's historical detective work is fascinating."—Debby Applegate, Pulitzer Prize-winning author of The Most Famous Man in America: The Biography of Henry Ward Beecher
— Debby Applegate

"What makes her seminal opus so significant is how she painstakingly reconstructs her forefathers' past in light of the overall African-American struggle for emancipation and equality in the 1800s. . . . Calra Peterson's overdue tribute to her intrepid ancestors [is] an invaluable addition to the annals of African-American literature."—Kam Williams, Arizona Informant
— Kam Williams

The winning book must evoke the spirit of New York City, with the city playing an essential, invigorating role beyond that of the setting.