Iphigenia in Forest Hills: Anatomy of a Murder Trial (Paperback) 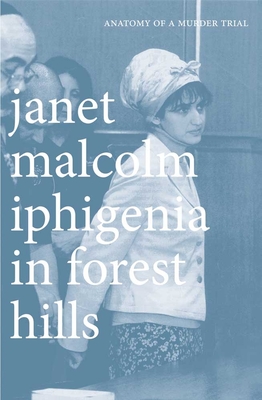 Iphigenia makes American justice seem more like a menacing catchphrase than a functional system. Mazoltuv Borukhova's innocence or guilt? Inconsequential compared to the self-aggrandizing hoke of the court that tried her.

With a title evoking both antiquity and clinical thoroughness, you might expect broad historical context and a dissection of the mechanics of the criminal justice system; instead you'll find portraits of ambitious provincial prosecutors, conspiracy-theorist social workers, and unassimilated Russian thugs, all observed through Malcolm's psychoanalytic lens. Also a glimpse into a Central Asian Jewish sect whose members are now found only in Israel and our very own Forest Hills.

"Astringent and absorbing. . . . Iphigenia in Forest Hills casts, from its first pages, a genuine spell — the kind of spell to which Ms. Malcolm’s admirers (and I am one) have become addicted."—Dwight Garner, New York Times

"This is shrewd and quirky crime reporting at its irresistible and disabused best."—Louis Begley, Wall Street Journal

"She couldn't have done it and she must have done it." This is the enigma at the heart of Janet Malcolm's riveting book about a murder trial in the insular Bukharan-Jewish community of Forest Hills, Queens, that captured national attention. The defendant, Mazoltuv Borukhova, a beautiful young physician, is accused of hiring an assassin to kill her estranged husband, Daniel Malakov, a respected orthodontist, in the presence of their four-year old child. The prosecutor calls it an act of vengeance: just weeks before Malakov was killed in cold blood, he was given custody of Michelle for inexplicable reasons. It is the "Dickensian ordeal" of Borukhova's innocent child that drives Malcolm's inquiry.

With the intellectual and emotional precision for which she is known, Malcolm looks at the trial—"a contest between competing narratives"—from every conceivable angle. It is the chasm between our ideals of justice and the human factors that influence every trial—from divergent lawyering abilities to the nature of jury selection, the malleability of evidence, and the disposition of the judge—that is perhaps most striking.

Surely one of the most keenly observed trial books ever written, Iphigenia in Forest Hills is ultimately about character and "reasonable doubt." As Jeffrey Rosen writes, it is "as suspenseful and exciting as a detective story, with all the moral and intellectual interest of a great novel."

"Iphigenia in Forest Hills is another dazzling triumph from Janet Malcolm. Here, as always, Malcolm’s work inspires the best kind of disquiet in a reader—the obligation to think." —Jeffrey Toobin, author of The Nine: Inside the Secret World of the Supreme Court

"A remarkable achievement that ranks with Malcolm's greatest books. Her scrupulous reporting and interviews with protagonists on both sides of the trial make her own narrative as suspenseful and exciting as a detective story, with all the moral and intellectual interest of a great novel." —Jeffrey Rosen, author of The Supreme Court: The Personalities and Rivalries that Defined America

Janet Malcolm (1934-2021) was the author of Two Lives: Gertrude and Alice, which won the PEN Biography Award, The Journalist and the Murderer, The Silent Woman: Sylvia Plath and Ted Hughes, Reading Chekhov, Burdock, and other books. Malcolm wrote frequently for the New Yorker and the New York Review of Books.

"Reading [Malcolm], you have the sensation of encountering a mind at once incredibly blunt and terrifically precise: a sledgehammer that could debone a shad. That rare and strange effect could only be produced by an intellect as formidable as Malcolm’s."—Kathryn Schulz, Boston Globe

"This is shrewd and quirky crime reporting at its irresistible and disabused best."—Louis Begley, Wall Street Journal

"In Iphigenia in forest Hills, Janet Malcolm turns her excellence in first-person reportage to the American justice system, by way of a real jury trial in New York City in 2009. . . . A gripping read."—Marcel Berlins, The Times

"[Malcolm] is an excellent observer, with a good eye for detail."—Lynn Barber, The Sunday Times

"Ms. Malcolm’s books have wintry atmospheres—both intellectual and aesthetic—that derive partly from the way she takes facts and attaches them, like someone hanging tea-light candles from high rafters, to mythology and classic literature."—Dwight Garner, New York Times

"It would be interesting to put Tom Wolfe (a humidifier) and Ms. Malcolm (a dehumidifier) on the same court case and let them fight it out for the available oxygen in the room."—Dwight Garner, New York Times

"This new book does for the courtroom what Malcolm’s previous books did for biography, journalism and psychoanalysis. It shows that in a high-stakes trial nobody, least of all the judge, is an entirely disinterested player."—Jonathan Bate, The Sunday Telegraph

"Janet Malcolm’s new book, Iphigenia in Forest Hills, is a slim little volume. If it is a cold night and you don’t mind a few wrinkles, you can read the entire thing in the bath. If it is not a cold night, it will feel like one by the time you finish."—Kathryn Schulz, Boston Globe

"Iphigenia in Forest Hills is an incendiary book that begins and ends—like any good epic must—in medias res. . . . It's a story that discomfits as much as it explains. Not for Malcolm the journalism of 'reassurance' or 'rhetorical ruses,' her small book with big stakes and mythic underpinnings flies close to the sun. It unsettles and scorches and soars."—Parul Sehgal, Bookforum

"Absorbing. . . . Iphigenia in Forest Hills casts, from its first pages, a genuine spell—the kind of spell to which Ms. Malcolm’s admirers (and I am one) have become addicted."—Dwight Garner, New York Times Book Review

"Malcolm’s interpretation is . . . astonishing. . . . Under her brilliant gaze, a seemingly incidental detail shines suddenly with meaning."—Elizabeth Gumport, The Guardian

"Iphigenia in Forest Hills is a garden of forking paths where at every turn new and contradictory narrative byways open up. . . . A brief book but immense if measured by the implications that can be teased out of its sentences."—Geoffrey O'Brien, New York Review of Books

"Malcolm eschews the pretense of certainty that most journalists adopt; instead, her process of probing the ambiguities, of investigating exactly how much she knows and does not know, becomes crucial to her narratives. . . . In the rigor of her investigation [Malcolm] reaches a different kind of truth."—Ruth Franklin, New Republic

"Iphigenia in Forest Hills is a garden of forking paths where at every turn new and contradictory narrative byways open up. It is a brief book but immense if measured by the implications that can be teased out of its sentences—not to mention the spaces between the sentences. By the time we are done the certainties of legal evidence and judicial decisions have given way to a fundamental and unappeasable ambiguity."—Geoffrey O'Brien, New York Review of Books

"A curious, compelling, and somewhat bedeviling book. . . . Malcolm is wonderfully equipped for the task of anatomizing the dynamics of the legal process. Her oeuvre of books has mixed clear-eyed reporting with rigorous investigations into the lures and snares of narrative, and she writes a precise, unflappable prose that seems purpose-built to chart the inflationary theatrics of a high-stakes trial."—Eli Gottlieb, Forward

"It would be hard to pinpoint a common link between Janet Malcolm's many books, other than their consistent brilliance. . . . In Malcolm's hands, this isn't just the story of murder trial; it's a disquisition on the theater of justice. . . . Suffice it to say, after reading Iphigenia in Forest Hills, you are not likely to view future criminal trials in the same light."—Alan Bisbort, The Sunday Republican

"Iphigenia in Forest Hills is a garden of forking paths where at every turn new and contradictory narrative byways open up."—Geoffrey O'Brien, The New York Review of Books

"[Malcolm] is obviously a talented journalist who obtains a great deal of information and offers it to her rapt readers with considerable flair. Malcolm raises acute questions about out trial system. . . . Her perceptive analysis provides readers with a great deal to ponder."—Morton I. Teicher, The Buffalo Jewish Review

"In brave and crisp language, Malcolm formulates a verdict to resonate beyond the courtroom."—David Astle, ABC Radio (Au), The Book Show

"Reading Janet Malcolm’s new book, you might mistakenly think you had picked up a novel. Yet the plot is all too true and the characters are right out of the pages of the newspapers. The story . . . is so well written here that you not only get the facts of the sensational murder and riveting trial, you get the conflicts and the doubts too. Both intellectual and emotional precision are the guiding forces in this tale of justice."—Jewish Book World

"So well written . . . you not only get the facts of the sensational murder and riveting trial, you get the conflicts and the doubts too. Both intellectual and emotional precision are the guiding forces in this tale of justice."—Jewish Book World


Finalist for the 2012 Book of the Year in the True Crime category, as awarded by ForeWord Magazine