Music for Silenced Voices: Shostakovich and His Fifteen Quartets (Paperback) 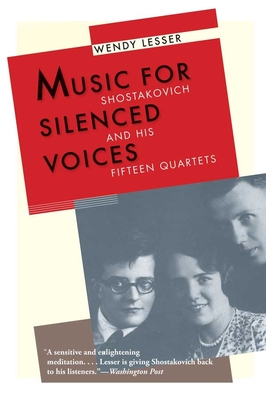 Most previous books about Dmitri Shostakovich have focused on either his symphonies and operas, or his relationship to the regime under which he lived, or both, since these large-scale works were the ones that attracted the interest and sometimes the condemnation of the Soviet authorities. Music for Silenced Voices looks at Shostakovich through the back door, as it were, of his fifteen quartets, the works which his widow characterized as a "diary, the story of his soul." The silences and the voices were of many kinds, including the political silencing of adventurous writers, artists, and musicians during the Stalin era; the lost voices of Shostakovich's operas (a form he abandoned just before turning to string quartets); and the death-silenced voices of his close friends, to whom he dedicated many of these chamber works.

Wendy Lesser has constructed a fascinating narrative in which the fifteen quartets, considered one at a time in chronological order, lead the reader through the personal, political, and professional events that shaped Shostakovich's singular, emblematic twentieth-century life. Weaving together interviews with the composer's friends, family, and colleagues, as well as conversations with present-day musicians who have played the quartets, Lesser sheds new light on the man and the musician. One of the very few books about Shostakovich that is aimed at a general rather than an academic audience, Music for Silenced Voices is a pleasure to read; at the same time, it is rigorously faithful to the known facts in this notoriously complicated life. It will fill readers with the desire to hear the quartets, which are among the most compelling and emotionally powerful monuments of the past century's music.

Wendy Lesser, the editor of The Threepenny Review, is the author of seven previous nonfiction books and one novel. She divides her year between Berkeley and New York.

“Music for Silenced Voices is a sensitive and enlightening meditation. . . . Lesser, in other words, is giving Shostakovich back to his listeners.”—Paul Mitchinson, Washington Post
— Paul Mitchinson

“This book is a paean to Shostakovich’s quartets and their significance.  In her listening, Lesser…is literate, sensitive, and imaginative.”—Edward Rothstein, The New York Times Book Review
— Edward Rothstein

"We need to find new approaches in order to bring music into the mainstream of general culture, where it belongs. Music for Silenced Voices helps to show that this can be done, and done well."—Jessica Duchen, Standpoint
— Jessica Duchen

"An elegant, thought-provoking synthesis of the current state of knowledge and ideas about one of the most celebrated and controversial composers of the twentieth century. It is a delight to read, and reread."—Laurel E. Fay
— Laurel E. Fay

"Lesser moves between looking at the life as a way of understanding the quartets, and using the music of the quartets as a way of comprehending the complexities of Shostakovich and the manner in which he both negotiated and was pushed through the history of Stalin’s Soviet Union. The always imprecise links between a life and the work that comes out of it are beautifully elucidated. The idea of the quartets as songs for not singing resonates with many other elements of Shostakovich’s contradictory life."—William Kentridge
— William Kentridge

“Thoughtful and appealing…[Lesser’s] commitment to Shostakovich is so intense that she achieves what every critic must hope for: Lesser sends us straight back to the quartets, to see if we can hear what she hears.”—Adam Kirsch, The Barnes and Noble Review

“The book does not disappoint….The cumulative effect of the book is to send us back to the music with renewed enthusiasm and enhanced insight; and the impression of Shostakovich and his world as conveyed in its pages lingers in the mind long after the cover is closed.”—Jessica Duchen, Standpoint
— Jessica Duchen

"It is clear that no other analyst could do better . . . Lesser has acquitted herself very well indeed, and we should hope for more from her in future."—R.J. Stove, The American Conservative
— R.J. Stove

"What makes Lesser's book such a ripping good read, in addition to deeply considered music appreciation, is her intelligently personal involvement with the subject."—Jonathan Kiefer, SF Weekly
— Jonathan Kiefer

"A sensitive and enlightening meditation. . . . Lesser is giving Shostakovich back to his listeners."—Paul Mitchinson, The Washington Post
— Paul Mitchinson

“Written with the general reader in mind, it is an altogether remarkable book; a deeply serious and scholarly yet astutely accessible and rewarding portrait of a man caught and confined within a murderous maelstrom whose response was music in which the personal and the political are indelibly, and perhaps intractably, intertwined.”—Michael Quinn, Classical Music
— Michael Quinn

“…..It is hard not to be swept up in the stories behind the Shostakovich cycle and by the zeal of Wendy Lesser’s advocacy. The cumulative impact of Music for Silenced Voices is considerable.”—John Greening, Times Literary Supplement
— John Greening

“….this is a study that has much to offer to all who know and love Shostakovich’s quartets, and there should be few performers, critics or musicologists who would read it without profit.”—David Fanning, Gramophone
— David Fanning

"An enormously gripping read… [Wendy Lesser] has that rare capacity to illuminate the music through the written word… Her absorbing reflections stimulate you to think afresh about some of the most profound and disturbing music written in the last hundred years… skilful interweaving of the music against a narrative that explores Shostakovich's tortured personality and his troubled relationship with the Soviet regime."—Erik Levi, BBC Music Magazine
— Erik Levi

“A rich blend of biographical anecdote and interpretation of the personal man…and the public man. Lesser…presents a complex man who was aware that he was making terrible compromises to protect himself and his family.”—Library Journal

“Lesser has written a sensitive biography…a generous reflection on his life and chamber music.”—Michael O’Donnell, The Nation
— Michael O'Donnell