The Infinite Playground: A Player's Guide to Imagination (Paperback) 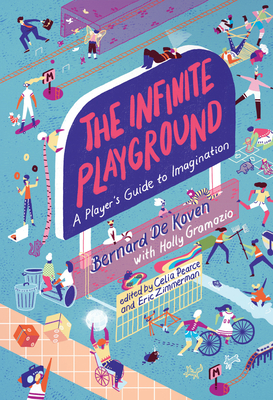 In his final work, a visionary game designer reveals how a surprising range of play-based experiences can unlock our imagination and help us capture the power of fun and delight.

Bernard De Koven (1941–2018) was a pioneering designer of games and theorist of fun. He studied games long before the field of game studies existed. For De Koven, games could not be reduced to artifacts and rules; they were about a sense of transcendent fun. This book, his last, is about the imagination: the imagination as a playground, a possibility space, and a gateway to wonder. The Infinite Playground extends a play-centered invitation to experience the power and delight unlocked by imagination. It offers a curriculum for playful learning.

De Koven guides the readers through a series of observations and techniques, interspersed with games. He begins with the fundamentals of play, and proceeds through the private imagination, the shared imagination, and imagining the world—observing, “the things we imagine can become the world.” Along the way, he reminisces about playing ping-pong with basketball great Bill Russell; begins the instructions for a game called Reception Line with “Mill around”; and introduces blathering games—Blather, Group Blather, Singing Blather, and The Blather Chorale—that allow the player's consciousness to meander freely.

Delivered during the last months of his life, The Infinite Playground has been painstakingly cowritten with Holly Gramazio, who worked together with coeditors Celia Pearce and Eric Zimmerman to complete the project as Bernie De Koven's illness made it impossible for him to continue writing. Other prominent game scholars and designers influenced by De Koven, including Katie Salen Tekinbaş, Jesper Juul, Frank Lantz, and members of Bernie's own family, contribute short interstitial essays.

Bernard De Koven was a leading game designer and theorist of fun. He was a codirector of the New Games Foundation, a founder of the Games Preserve, the author of The Well-Played Game: A Player's Philosophy (MIT Press), Junkyard Sports, and A Playful Path, and creator of the website deepfun.com.