Drawing Physics: 2,600 Years of Discovery From Thales to Higgs (Paperback) 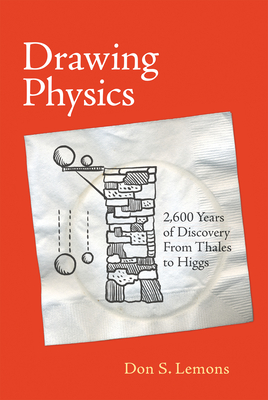 Drawings and short essays offer engaging and accessible explanations of key ideas in physics, from triangulation to relativity and beyond.

Humans have been trying to understand the physical universe since antiquity. Aristotle had one vision (the realm of the celestial spheres is perfect), and Einstein another (all motion is relativistic). More often than not, these different understandings begin with a simple drawing, a pre-mathematical picture of reality. Such drawings are a humble but effective tool of the physicist's craft, part of the tradition of thinking, teaching, and learning passed down through the centuries. This book uses drawings to help explain fifty-one key ideas of physics accessibly and engagingly. Don Lemons, a professor of physics and author of several physics books, pairs short, elegantly written essays with simple drawings that together convey important concepts from the history of physical science.

Lemons proceeds chronologically, beginning with Thales' discovery of triangulation, the Pythagorean monocord, and Archimedes' explanation of balance. He continues through Leonardo's description of “earthshine” (the ghostly glow between the horns of a crescent moon), Kepler's laws of planetary motion, and Newton's cradle (suspended steel balls demonstrating by their collisions that for every action there is always an equal and opposite reaction). Reaching the twentieth and twenty-first centuries, Lemons explains the photoelectric effect, the hydrogen atom, general relativity, the global greenhouse effect, Higgs boson, and more. The essays place the science of the drawings in historical context—describing, for example, Galileo's conflict with the Roman Catholic Church over his teaching that the sun is the center of the universe, the link between the discovery of electrical phenomena and the romanticism of William Wordsworth, and the shadow cast by the Great War over Einstein's discovery of relativity.

Readers of Drawing Physics with little background in mathematics or physics will say, “Now I see, and now I understand.”

Although physics complexifies through the 19th and 20th centuries, with Maxwell, Einstein and their fellow brainiacs pushing the limits of comprehension, the book retains its clarity and charm.—Wall Street Journal—

Simple, evocative black-and-white line drawings illustrate millennia of famous discoveries in this delightful volume.... The book is a perfect starting point for those who want to learn more about the history of physics.

A must-have for teachers, Drawing Physics would also be enjoyed by an layperson interested in improving their grasp on physics and learning about the history of scientific thought.