Absence of Clutter: Minimal Writing as Art and Literature (Hardcover) 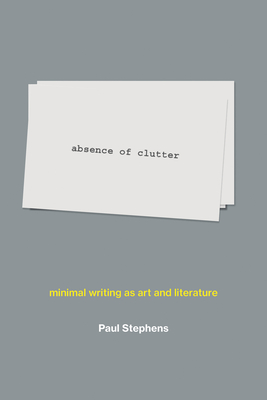 An exploration of minimal writing--texts generally shorter than a sentence--as complex, powerful literary and visual works.

In the 1960s and 70s, minimal and conceptual artists stripped language down to its most basic components: the word and the letter. Barbara Kruger, Jenny Holzer, Carl Andre, Lawrence Weiner, and others built lucrative careers from text-based art. Meanwhile, poets and writers created works of minimal writing--visual texts generally shorter than a sentence. (One poem by Aram Saroyan reads in its entirety: eyeye.) In absence of clutter, Paul Stephens offers the first comprehensive account of minimal writing, arguing that it is equal in complexity and power to better-known, more commercial text-based art.

Minimal writing, Stephens writes, can be beguilingly simple on the surface, but can also offer iterative reading experiences on multiple levels, from the fleeting to the ponderous. "absence of clutter," for example, the entire text of a poem by Robert Grenier, is both expressive and self-descriptive. Stephens first sets out a theoretical framework for reading and viewing minimal writing and then offers close readings of works of minimal writing by Saroyan, Grenier, Norman Pritchard, Natalie Czech, and others. He "reverse engineers" recent works by Jen Bervin, Craig Dworkin, and Christian B k that draw on molecular biology, and explores print-on-demand books by Holly Melgard, code poetry by Nick Montfort, Twitter-based work by Allison Parrish, and the use of Instagram by Hans-Ulrich Obrist and Saroyan. Text, it seems, is becoming ever more prevalent in visual art; meanwhile, poems are getting shorter. When reading has become scanning a screen and writing tapping out a text, absence of clutter invites us to reflect on how we read, see, and pay attention.