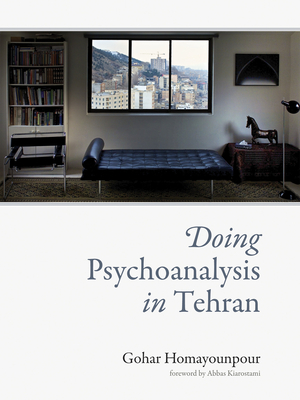 Sigmund Freud is alive and well and living in Tehran. Homayounpour lucidly captures the personal complexities of practicing the talking cure in her motherland, and offers an elegant truth: though we are divided by language, culture, and history, the unbearable lightness of being is a universal experience.

A statement on behalf of an embattled vocation; Homayounpour gives a moving account of a mutually fraught analysis, of her return to Iran to practice, and of her relationship with her father, mediated by literature and the works of Kundera. The flowing association within these topics is apropos, and the introductory polemic - against psychoanalytic Orientalism on the one hand and particularist anti-Freudian doxa on the other - is a powerful assertion of the capacity of 'the talking cure' to adapt itself not only to myriad cultures, but more importantly, to each participant.

A Western-trained psychoanalyst returns to her homeland and tells stories of displacement, nostalgia, love, and pain.

Is psychoanalysis possible in the Islamic Republic of Iran? This is the question that Gohar Homayounpour poses to herself, and to us, at the beginning of this memoir of displacement, nostalgia, love, and pain. Twenty years after leaving her country, Homayounpour, an Iranian, Western-trained psychoanalyst, returns to Tehran to establish a psychoanalytic practice. When an American colleague exclaims, “I do not think that Iranians can free-associate!” Homayounpour responds that in her opinion Iranians do nothing but. Iranian culture, she says, revolves around stories. Why wouldn't Freud's methods work, given Iranians' need to talk?

Thus begins a fascinating narrative of interlocking stories that resembles—more than a little—a psychoanalytic session. Homayounpour recounts the pleasure and pain of returning to her motherland, her passion for the work of Milan Kundera, her complex relationship with Kundera's Iranian translator (her father), and her own and other Iranians' anxieties of influence and disobedience. Woven throughout the narrative are glimpses of her sometimes frustrating, always candid, sessions with patients. Ms. N, a famous artist, dreams of abandonment and sits in the analyst's chair rather than on the analysand's couch; a young chador-clad woman expresses shame because she has lost her virginity; an eloquently suicidal young man cannot kill himself.

As a psychoanalyst, Homayounpour knows that behind every story told is another story that remains untold. Doing Psychoanalysis in Tehran connects the stories, spoken and unspoken, that ordinary Iranians tell about their lives before their hour is up.

Gohar Homayounpour is a practicing psychoanalyst in Tehran. She trains and supervises the psychoanalysts of the Freudian Group of Tehran and is Professor of Psychology at Shahid Besheti University Tehran.