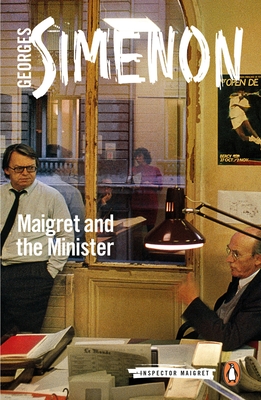 This is book number 46 in the Inspector Maigret series.

When a public tragedy threatens to expose a scandal within the Paris government, the Minister of Public Works calls in a favor to Maigret

A public project has collapsed and resulted in the death of 128 children after a report warning officials about the unsafe structure was disregarded. Now, that report has resurfaced, along with allegations that several politicians and contractors involved with the project may have suppressed its findings to avoid a scandal.

Maigret must enter the shifty world of politics, dodged by members of the security police wherever he goes. In an unfamiliar world of decadent diplomatic officials, fanatic followers of political parties, and suspicious staff in politicians’ entourages, Maigret grimly sticks to what he knows best: finding the perpetrators of criminal acts.

Georges Simenon (1903–1989) was born in Liège, Belgium. He is best known in the English-speaking world as the author of the Inspector Maigret books. His prolific output of more than four hundred novels and short stories has made him a household name in continental Europe.