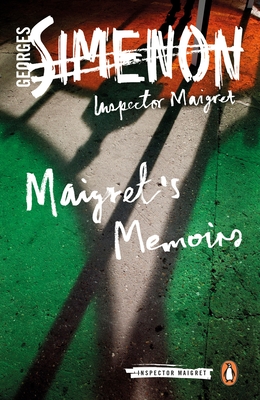 This is book number 35 in the Inspector Maigret series.

As if Maupassant (or the filmmaker Jacques Rivette) reflected on stories from their lives in the midst of crafting an elaborate jewel heist crime mystery. Except the mystery story is quickly forgotten, instead you're left with a somber, existential rumination on the nature of life, ambition, mundane work, and the intricacies of family histories. Simenon is a master and one could spend a full year reading as many of his works as possible, back-to-back.

In this make-believe memoir, Maigret recounts a meeting with the author himself. The account starts with the arrival of Georges Sim, as he is called here, at the Paris Police Judiciaire to soak up atmosphere for his crime novels by dogging the footsteps of Inspector Maigret. The detective is irritated by the audacious young writer who names a character after him and argues that he oversimplifies, in his fiction, the intricate duties of the police investigating a case. Here, Maigret “sets the record straight,” telling readers how he’s different from the invention, and about his courtship and marriage to his beloved Louise.

Ingeniously amusing and tender, Maigret’s Memoirs is a look inside the mind of the brilliant Maigret like never before.

Georges Simenon (1903–1989) was born in Liège, Belgium. He is best known in the English-speaking world as the author of the Inspector Maigret books. His prolific output of more than four hundred novels and short stories has made him a household name in continental Europe.

"Gem-hard soul-probes . . . not just the world's bestselling detective series, but an imperishable literary legend . . . he exposes secrets and crimes not by forensic wizardry, but by the melded powers of therapist, philosopher and confessor" ― Times (London)

"Strangely comforting . . . so many lovely bistros from the Paris of mid-20th C. The corpses are incidental, it's the food that counts." ― Margaret Atwood

"One of the greatest writers of the 20th century . . . no other writer can set up a scene as sharply and with such economy as Simenon does . . . the conjuring of a world, a place, a time, a set of characters - above all, an atmosphere." ― Financial Times

"Gripping . . . richly rewarding . . . You'll quickly find yourself obsessing about his life as you tackle each mystery in turn."-- Stig Abell ― The Sunday Times (London)