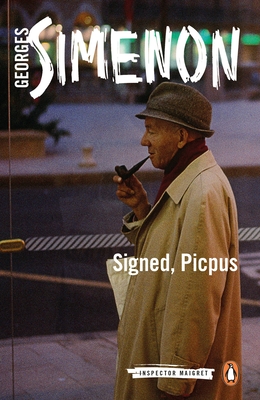 This is book number 23 in the Inspector Maigret series.

“Mechanically, he had put his pince-nez down on the blotter and looked at it there with his large, short-sighted eyes. It is at that moment that the strange thing happens. One of the lenses, acting as a mirror, reflected the criss-cross, hatched ink marks which had dried on the blotter and he could just make out a couple of words.”

When a fortune-teller is found murdered in her apartment, Maigret must find out not only who commited the crime, but why it was predicted in a note found earlier—signed by the unknown Picpus.

Georges Simenon was born in Liège, Belgium, in 1903. Best known in the English-speaking world as the author of the Maigret books, his prolific output of over 400 novels and short stories has made him a household name in continental Europe. He died in 1989 in Lausanne, Switzerland, where he had lived for the latter part of his life.