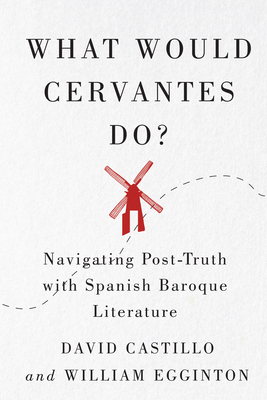 The attack on the US Capitol on 6 January 2021 was a tragic illustration of the existential threat that the viral spread of disinformation poses in the age of social media and twenty-four-hour news. From climate change denialism to the frenzied conspiracy theories and racist mythologies that fuel antidemocratic white nationalist movements in the United States and abroad, What Would Cervantes Do? is a lucid meditation on the key role the humanities must play in dissecting and combatting all forms of disinformation. David Castillo and William Egginton travel back to the early modern period, the first age of inflationary media, in search of historically tested strategies to overcome disinformation and shed light on our post-truth market. Through a series of critical conversations between cultural icons of the twenty-first century and those of the Spanish Golden Age, What Would Cervantes Do? provides a tour-de-force commentary on current politics and popular culture. Offering a diverse range of Cervantist comparative readings of contemporary cultural texts –movies, television shows, and infotainment – alongside ideas and issues from literary and cultural texts of early modern Spain, Castillo and Egginton present a new way of unpacking the logic of contemporary media. What Would Cervantes Do? is an urgent and timely self-help manual for literary scholars and humanists of all stripes, and a powerful toolkit for reality literacy.

“What Would Cervantes Do? is a persuasive exercise in making comparisons, and an enlightening guide both to seventeenth-century Spain and to our current circumstances.” Times Literary Supplement

"This book comes at the hour of greatest need. It demonstrates unequivocally the relevance of Cervantes and the Spanish Baroque to our present predicament. Forget POTUS, FLOTUS, and SCOTUS! Only Castillo and Egginton can save us!" William P. Childers, Brooklyn College and CUNY Graduate Center