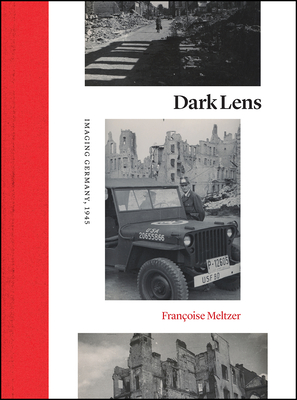 Esteemed scholar Françoise Meltzer examines images of war ruins in Nazi Germany and the role that images play in how we construct memories of war.

The ruins of war have long held the power to stupefy and appall. Can such ruins ever be persuasively depicted and comprehended? Can images of ruins force us to identify with the suffering of the enemy and raise uncomfortable questions about forgiveness and revenge?

Françoise Meltzer explores these questions in Dark Lens, which uses the images of war ruins in Nazi Germany to investigate problems of aestheticization and the representation of catastrophe. Through texts that give accounts of bombed-out towns in Germany in the last years of the war, painters’ attempts to depict the destruction, and her own mother’s photographs taken in 1945, Meltzer asks if any medium offers a direct experience of war ruins for the viewer. Refreshingly accessible and deeply personal, Dark Lens is a compelling look at the role images play in constructing memory.

Françoise Meltzer is the Edward Carson Waller Distinguished Service Professor at the University of Chicago, where she is also professor at the Divinity School and in the College. Meltzer is the author of five books, most recently of Seeing Double: Baudelaire’s Modernity, and a co-editor of the journal Critical Inquiry.

“It is the ‘righteous pleasure in retribution’ that worries Meltzer in Dark Lens, a work of scholarship organized around a collection of previously unpublished amateur photographs, taken by Jeanne Dumilieu (the author’s mother), that feature ruins in the wake of the Allied bombings of Germany. . . . Our gaze is precisely what Meltzer is interested in investigating. What and how do we see when we see these photos? Can we even see the ruin as such? This proposition suggests a provocative way of rereading the history of interest in and representation of ruins. Perhaps our enduring obsession with them—and our drive to depict and behold them—is fueled by our very inability to reckon with destruction.”

“Meltzer’s Dark Lens is based around a couple of dozen snaps which her mother, a Frenchwoman who had been in the Resistance, took of ruined German cities immediately after the war. This personal angle whets the reader’s appetite, as does the reminder of just how strangely fascinated we all are by ruins.”
— James Hawes

“A cache of Jeanne Dumilieu’s previously unpublished photographs of these destroyed German cityscapes forms the focal point of Dark Lens, a genre-defying book that is at once a family photo album, an autobiographical meditation, a cultural history of ruins, and a rigorous work of photographic criticism. . . . Meltzer’s latest book is a welcome addition to scholarship that, in the last decade, has finally begun to take photography seriously as a medium that can productively complicate historical understandings of traumatic history.”
— Central European History

"Meltzer’s book is a fascinating study of a long-gone but still resonant period and raises important ethical and aesthetic questions. It is written with elegance and grace, and it deserves respectful attention from German Studies scholars."
— Monatshefte

“Meltzer has written a masterpiece—an intensely personal, beautifully expressed, and reflective critical interrogation of transgenerational haunting in relation to the ruins that dominated her own childhood in post-War Germany. One special feature of Meltzer's writing is the subtle and riveting range of perspectives she brings. It is rare to find such voices so superbly melded in so urgent and important a text."
— Jas Elsner, University of Oxford

“Can catastrophe and the suffering of others be persuasively represented so as to reduce human suffering? In Dark Lens, Meltzer addresses this question fully, with a theoretically versatile examination of attempts to capture catastrophes in words and images. Meltzer stresses the historical and ethical contexts in which these texts demand to be read but recognizes that no amount of theorizing or moralizing will domesticate the upsetting incongruities she lays bare.”
— Werner Sollors, author of The Temptation of Despair: Tales of the 1940s

"Meltzer’s meditation on her mother’s searing photographs of German ruins is bold yet subtle. Dark Lens tears these images out of the continuum of history to examine civilian suffering. Meltzer suggests a way of looking at pictures of destruction without lapsing into either moral relativism or another cycle of blame and retribution."
— Ulrich C. Baer, New York University

"Can we escape the Romantics’ aesthetization of ruins when we 'read' Germany’s ruins? Do the texts, paintings and photographs allow us to 'see' the suffering of civilians – then and now? No other ruin scholar has raised the ethical questions provoked by these haunting ruinscapes as subtly and rigorously as Meltzer. When she leaves us alone with her mother’s photographs, Meltzer’s probing reflections have prepared us to think about what a concept of ruin art might mean in this politically treacherous context."

— Julia Hell, co-editor of Ruins of Modernity and author of The Conquest of Ruins: The Third Reich and the Fall of Rome