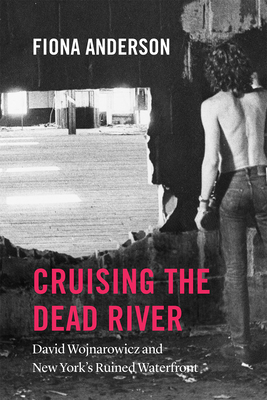 In the 1970s, Manhattan’s west side waterfront was a forgotten zone of abandoned warehouses and piers. Though many saw only blight, the derelict neighborhood was alive with queer people forging new intimacies through cruising. Alongside the piers’ sexual and social worlds, artists produced work attesting to the radical transformations taking place in New York. Artist and writer David Wojnarowicz was right in the heart of it, documenting his experiences in journal entries, poems, photographs, films, and large-scale, site-specific projects. In Cruising the Dead River, Fiona Anderson draws on Wojnarowicz’s work to explore the key role the abandoned landscape played in this explosion of queer culture. Anderson examines how the riverfront’s ruined buildings assumed a powerful erotic role and gave the area a distinct identity. By telling the story of the piers as gentrification swept New York and before the AIDS crisis, Anderson unearths the buried histories of violence, regeneration, and LGBTQ activism that developed in and around the cruising scene.

Fiona Anderson is a senior lecturer in art history in the Fine Art Department at Newcastle University.

“A fascinating journey in cruising, sex, and the art scene of Manhattan’s dilapidated waterfront in the 1970s and 1980s.”

"Replete with archival and object-based analyses, Cruising the Dead River is at once a well-crafted examination of this diverse and neglected history and a highly instructive example for future scholars. . . . Anderson’s study is likely to have a further, catalytic effect, thanks to her insightful eye and deep archival knowledge."
— ASAP Journal

"Anderson’s book is rigorously researched but she manages to employ this with a light touch, weaving references from Derrida to Catherine Grant, theories of hauntology to theories of fandom, alongside anecdotal accounts of the piers’ activities and close readings of individual artworks by artists such as Peter Hujar, Gordon Matta-Clark and Emily Roysdon. The theory activates rather than distances our visualisation of the waterfront and those who cruised and worked there, making art and selling sex, hanging out in the ‘no-man’s land’."
— This is Tomorrow

“What a strange queer utopia New York’s piers turned out to be: dirty, dangerous, even violent, but at the same time a raw template that took the form of queer desires and imagined futures. In this book—wistful, historical, and necessarily political—Anderson brings deep research and sympathy to this vanished paradise, the crucible for some of the most important art of the last decades of the twentieth century. Cruising the Dead River is quietly masterful, enriched by a firm grasp of theory lightly worn and a propulsive energy that makes it a genuine pleasure to read.”
— Jonathan D. Katz, University of Buffalo

“Cruising the Dead River is an original and thoroughly researched examination of the experimental expressions of sex and art made possible by Manhattan’s dilapidated waterfront in the 1970s and 1980s. The wealth of fascinating archival research about the city in this period, and Anderson's thick, detailed descriptions of the contesting forces that shaped its social, sexual, and artistic life are compelling. Considering how quickly contemporary queer and bohemian locales are being lost to gentrification, it is also an extremely timely book.”
— Gavin Butt, Northumbria University