Lost Mars: Stories from the Golden Age of the Red Planet (Paperback) 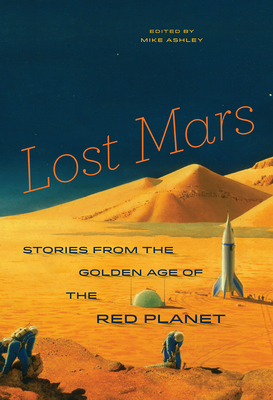 “I was suddenly struck with the sight of a trail of rich red vegetation of several miles in the midst of the eternal snows. I approached with curiosity this oasis in the frozen desert.”
An antique-shop owner gets a glimpse of the Red Planet through an intriguing artifact. A Martian’s wife contemplates the possibility of life on Earth. A resident of Venus describes his travels across the two alien planets. From an arid desert to an advanced society far superior to that of Earth, portrayals of Mars have differed radically in their attempts to uncover the truth about our neighboring planet.
Since the 1880s, after an astronomer first described “channels” on the surface of Mars, writers have been fascinated with the planet, endlessly speculating on what life on Mars might look like and what might happen should we make contact with the planet's inhabitants. This wonderful collection offers ten wildly imaginative short stories from the golden age of science fiction by such classic sci-fi writers as H.G. Wells, Ray Bradbury, and J. G. Ballard, as well as hard-to-find stories by unjustly forgotten writers from the genre.
Assembled and introduced by acclaimed anthologist Mike Ashley, these stories vividly evoke a time when notions of life on other planets—from vegetation and water to space invaders and utopian societies—were new and startling. As we continue to imagine landing people on Mars, these stories are well worth revisiting as gripping and vivid dispatches from futurists past.

Mike Ashley is a leading historian of sci-fi magazines. He is the author of Out of this World: Science Fiction But Not as You Know It, and of the Edgar Award–winning The Mammoth Encyclopedia of Modern Crime Fiction. He has also served as an editor for numerous encyclopedia works of genre fiction.

“This superlative set of stories shows us how the Red Planet has served both as a character in its own right—its physical realities conjured up vividly as a counterpart to Earth’s beneficent clime—and as a foil for the many kinds of drama that humans inflict on the landscape of any place they choose to inhabit. . . . Vibrant and powerful.”
— Locus Magazine

“These stories are of the highest quality and illustrate how our evolving understanding of the Red Planet changed the way we wrote about it and how Mars came to occupy a prominent position in our hopes, dreams, and fears as the modern age dawned and grew. . . . A fascinating overview of the history of Mars in science fiction, from the birth of the genre through the beginning of the space age.”
— Booklist