Philology of the Flesh (Hardcover) 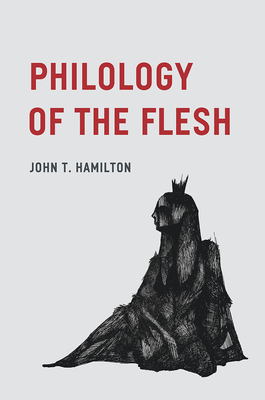 As the Christian doctrine of Incarnation asserts, “the Word became Flesh.” Yet, while this metaphor is grounded in Christian tradition, its varied functions far exceed any purely theological import. It speaks to the nature of God just as much as to the nature of language.

In Philology of the Flesh, John T. Hamilton explores writing and reading practices that engage this notion in a range of poetic enterprises and theoretical reflections. By pressing the notion of philology as “love” (philia) for the “word” (logos), Hamilton’s readings investigate the breadth, depth, and limits of verbal styles that are irreducible to mere information. While a philologist of the body might understand words as corporeal vessels of core meaning, the philologist of the flesh, by focusing on the carnal qualities of language, resists taking words as mere containers.

By examining a series of intellectual episodes—from the fifteenth-century Humanism of Lorenzo Valla to the poetry of Emily Dickinson, from Immanuel Kant and Johann Georg Hamann to Friedrich Nietzsche, Franz Kafka, and Paul Celan—Philology of the Flesh considers the far-reaching ramifications of the incarnational metaphor, insisting on the inseparability of form and content, an insistence that allows us to rethink our relation to the concrete languages in which we think and live.

John T. Hamilton is the William R. Kenan Professor of German and Comparative Literature at Harvard University. He is the author of Soliciting Darkness; Music, Madness, and the Unworking of Language; Security; and Philology of the Flesh, also published by the University of Chicago Press.

"In an impressive display of literary knowledge and readerly acumen, John T. Hamilton’s Philology of the Flesh investigates how the materiality of language resists instrumentalization and subjugation to meaning from fifteenth-century theology through the poetry of Paul Celan. . . . Approached as a series of discrete meditations, Philology of the Flesh delivers what are likely to become canonical readings of a wide-ranging corpus of texts and authors; taken as a whole, it is a tour de force—and one that makes a compelling case for philology itself, for a loving struggle with language even and especially when it refuses to grant easy access to fixed meaning."
— The German Quarterly

"The Philology of the Flesh is comparative literature at its best: always attuned to word and sound play, sensitive to veiled metaphors and allusions, an incorporation of love of words and love of earthly, contingent, mortal truths."
— Comparative Literature Studies

"In Philology of the Flesh, Hamilton insightfully analyzes the importance and meaning of 'flesh' in Christian theology and history. But much more than that, Hamilton offers an erudite and wide-ranging series of—potentially discrete—meditations on an impressive range of authors and texts, addressing relations among philology and philosophy, poetry and literature, literature and scripture. Reading the book is more like practicing meditations among muses, all centered on the difficulties of reading and eventually the impossibility of 'any secure destination.' The central theme throughout is the materiality of textuality. “Philology” for Hamilton is reading by pressing against tissue that 'gives' a bit, but never completely 'gives way.' The flesh of all texts pushes back and never truly surrenders a soul."
— Dale B. Martin, Yale University

"With breathtaking historical erudition, exemplary conceptual clarity, and stylistic verve, John Hamilton guides the reader through the carnal career of words in the Western tradition. Taking the Christian notion of the word made flesh, the logos ensarkos, as point of departure, Hamilton elaborates—and put into practice—a theory of language and of that passionate engagement with language we call philology. While the new digital humanities pursue modes of 'distant reading,' The Philology of the Flesh tracks the incarnational metaphors at work in literary and philosophical texts from late antiquity to the present to model a way of reading that is joyously too close for (academic) comfort, one that libidinally implicates the reader in the life of words. Along the way we come into contact with texts by Augustine, Lorenzo Valla, Johann Georg Hamann, Emily Dickinson, Friedrich Nietzsche, Paul Celan, among others. Hamilton’s remarkable sensitivity to the carnal dimension of this contact is—perhaps paradoxically—nothing less than inspiring."
— Eric L. Santner, University of Chicago