A Mythology of Forms: Selected Writings on Art (Hardcover) 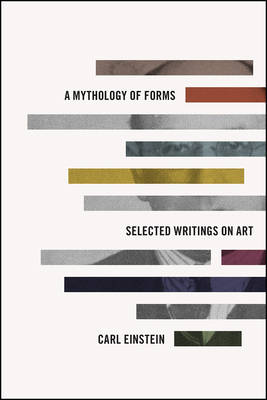 The German art historian and critic Carl Einstein (1885-1940) was at the forefront of the modernist movement that defined the twentieth century. One of the most prolific and brilliant early commentators on cubism, he was also among the first authors to assess African sculpture as art. Yet his writings remain relatively little known in the Anglophone world. With A Mythology of Forms, the first representative collection of Einstein’s art theory and criticism to appear in English translation, Charles W. Haxthausen fills this gap. Spanning three decades, it assembles the most important of Einstein’s writings on the art that was central to his critical project—on cubism, surrealism, Pablo Picasso, Georges Braque, and Paul Klee, and includes the full texts of his two pathbreaking books on African art, Negro Sculpture (1915) and African Sculpture (1921). With fourteen texts by Einstein, each presented with extensive commentary, A Mythology of Forms will bring a pivotal voice in the history of modern art into English.

Charles W. Haxthausen is the Robert Sterling Clark Professor, Emeritus of Art History at Williams College. He is coeditor of Berlin: Culture and Metropolis and editor of The Two Art Histories: The Museum and the University and Sol LeWitt: The Well-Tempered Grid. He has been named Distinguished Scholar at the Leonard A. Lauder Research Center for Modern Art at the Metropolitan Museum for 2019–20.

“Einstein was an extraordinary figure—groundbreaking author on African art, abstraction, Picasso, Braque, and Klee; close collaborator of Georges Bataille on the transformative journal Documents; brilliant exegete of prehistory; and bold practitioner of experimental literature that anticipates contemporary autofiction. Einstein lived modernism so fully that its double demand for aesthetic freedom and political commitment effectively tore him apart. Expertly introduced by Charles Haxthausen, this volume presents, for the first time for an Anglophone readership, an extensive selection of writings by one of the greatest thinkers of twentieth-century art and culture."
— Hal Foster, Townsend Martin 1917 Professor of Art & Archaeology, Princeton University

“In his partisan confrontation with the art of his brutal and exhilarating age, Einstein relentlessly tested the limits of language and self-knowledge. The opportunity to wrestle with his commitment to modernism’s radical alterity and to reckon honestly with his critical failures may well offer us one avenue of salvation from the resurgence of identitarian ideologies today. Haxthausen’s erudite translation is a gift for all who continue to feel the deep necessity of art and who struggle with its power to transform our vision of the world. A breathtaking accomplishment of great literary and theoretical imagination.”
— Megan R. Luke, University of Southern California

“This essential collection of Einstein’s writing gives a lucid account of his life and evolving thought, with many texts being made available in English for the first time. Haxthausen clearly explains the idiosyncratic terminology and language that Einstein uses in a variety of texts that range from his critical analysis of cubism to the colonialist foundations of ethnographic collecting. He also validates Einstein’s role in the foundation of Documents (1929–30), the French journal that countered the prevailing arguments of surrealism in art and literature of the time.”
— Marilyn McCully, cocurator of Tableaux magiques, Musée national Picasso–Paris, 2019

"A Mythology of Forms is certain to become an important reference in studies of modernism, critical theory, and the historiography of art history in the years to come. The book provides an excellent sample of Einstein’s larger corpus of writing on art, as well as a detailed road map to the literature of Einstein studies in English, French, and German."
— CAA.reviews