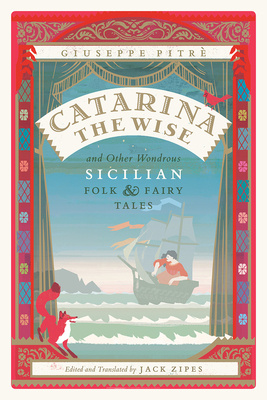 Well, gentlemen, here’s a tale that people have told time and again . . . .

So begins the title story in this collection of fifty Sicilian folk and fairy tales edited and translated by noted folklore scholar Jack Zipes. But while some of the stories may sound as if they’ve been told time and again—such as variations on Cinderella and Puss in Boots—many will enchant English-language readers and storytellers for the first time. From “The Pot of Basil” to “The Talking Belly,” “The Little Mouse with the Stinky Tail” to “Peppi, Who Wandered out into the World,” the stories in Catarina the Wise range from simple tales of getting a new dress or something good to eat to fantastical plots for outwitting domineering husbands, rescuing impoverished fathers, or attracting wealthy suitors (frequently the Prince of Portugal). Many feature strong, clever women (usually daughters who become queen). Many are funny; many are wise. Some are very, very strange.

As Zipes relates, the true story of their origins is as extraordinary as the tales themselves. Born to a poor family of sailors in Palermo, Giuseppe Pitrè would go on to serve with Garibaldi, become a traveling country doctor, and gather one of the most colossal collections of folk and fairy tales of the nineteenth century. But while his work as a folklorist rivaled that of the Brothers Grimm, Pitrè remains a relative unknown. Catarina the Wise highlights some of the most delectable stories at the heart of his collection. Featuring new, original illustrations, this book is a beautiful, charming treasure for any fan of story, storytelling, and heroines and heroes living happily ever after—sometimes.

“Zipes’s new translation . . . allows those without German expertise a chance to reexperience familiar stories in all their original Hemingwayesque terseness.”
— Michael Dirda

“As Zipes has documented in many studies of folk and fairy tales, our best-loved storybook heroines came to reflect the paternalistic values of Western society. What’s a kid to do? . . . The stories for children teach lessons: if you’re kind, resourceful and brave, you'll find happiness; sit pretty and wait for the prince, and you'll be sorry.”
— Caryn James

“The book is a classic, formed like a mosaic of precious small pieces, each one glinting with its own color and character, glassy and crystalline, but somehow hard, unyielding. . . . Zipes is on a lifelong mission, as ardent as the Grimms’, to bring fairy tales into circulation for the general increase of pleasure, mutual and ethical understanding . . . . his prodigious energy seems as inexhaustible as the fairy-tale purse that never empties.”
— Marina Warner

“Many scholars have sought to explain, and thereby demystify, the elusive spell cast by fairy tales. Zipes . . . uncovers provocative new layers of meaning by viewing the collection and creation of now classic tales by the Brothers Grimm, Hans Christian Andersen and others through the lens of history.”
— Diane Cole

“Full of intriguing details that leave a trail of breadcrumbs through the forest for anyone seeking a deeper understanding of the Brothers Grimm.”
— Independent, on "Grimm Legacies"

“Zipes in his translations has done a terrific job of reinventing . . . without condescension or archness.”
— Robin McKinley

“The art of translation is balancing the conflicting impulses to represent the original exactly and to craft a polished work of literature in the target language. In this edition, Zipes masterfully negotiates these conflicting impulses to present a collection of translated tales that give the reader a sense of multivocality through varying syntactic patterns, pacing, and vocabulary.”