The Culinarians: Lives and Careers from the First Age of American Fine Dining (Hardcover) 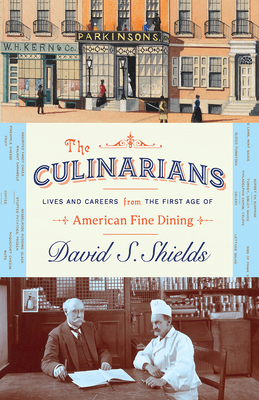 Former slaves who became catering luminaries (before there was catering, or even restaurants). Rogues, impresarios, and single women able to turn loves of wine, pastries, and oysters into lucrative careers. The incremental building of the idea of the restaurant, hotel banquet halls, and saloons, for the wealthy, and the poor, across the U.S. Geeky, academic food tome.

He presided over Virginia’s great political barbeques for the last half of the nineteenth century, taught the young Prince of Wales to crave mint juleps in 1859, catered to Virginia’s mountain spas, and fed two generations of Richmond epicures with terrapin and turkey.

This fascinating culinarian is John Dabney (1821–1900), who was born a slave, but later built an enterprising catering business. Dabney is just one of 175 influential cooks and restaurateurs profiled by David S. Shields in The Culinarians, a beautifully produced encyclopedic history of the rise of professional cooking in America from the early republic to Prohibition.

Shields’s concise biographies include the legendary Julien, founder in 1793 of America’s first restaurant, Boston’s Restorator; and Louis Diat and Oscar of the Waldorf, the men most responsible for keeping the ideal of fine dining alive between the World Wars. Though many of the gastronomic pioneers gathered here are less well known, their diverse influence on American dining should not be overlooked—plus, their stories are truly entertaining. We meet an African American oyster dealer who became the Congressional caterer, and, thus, a powerful broker of political patronage; a French chef who was a culinary savant of vegetables and drove the rise of California cuisine in the 1870s; and a rotund Philadelphia confectioner who prevailed in a culinary contest with a rival in New York by staging what many believed to be the greatest American meal of the nineteenth century. He later grew wealthy selling ice cream to the masses. Shields also introduces us to a French chef who brought haute cuisine to wealthy prospectors and a black restaurateur who hosted a reconciliation dinner for black and white citizens at the close of the Civil War in Charleston.

Altogether, Culinarians is a delightful compendium of charcuterie-makers, pastry-pipers, caterers, railroad chefs, and cooking school matrons—not to mention drunks, temperance converts, and gangsters—who all had a hand in creating the first age of American fine dining and its legacy of conviviality and innovation that continues today.

David S. Shields is the Carolina Distinguished Professor at the University of South Carolina and chairman of the Carolina Gold Rice Foundation. He has been the recipient of the Southern Foodways Alliance’s Ruth Fertel Keeper of the Flame Award, and his other books include Southern Provisions: The Creation and Revival of a Cuisine, also published by the University of Chicago Press.

“The Culinarians is well researched, highly original, and well written. It is a tremendous resource for general readers and a must-read for those interested in American food history. And it’s an enjoyable read!”
— Andrew F. Smith, editor-in-chief, Oxford Encyclopedia of American Food and Drink

“Once again, Shields adds another critical volume to the American cannon of food scholarship with this first ever history of the nation’s foundational ‘culinarians’—the chefs, caterers, and restauranteurs who made cooking an art long before ‘celebrity’ and ‘chef’ became a phrase in popular culture. This compelling selection of exhaustively researched biographical profiles reveals a multi-layered American cuisine grounded in labor, economic smarts, creativity, and skill that speaks of a nation inextricably shaped by race, class, gender, ethnicity, and region.”

— Marcie Cohen Ferris, author of The Edible South: The Power of Food and the Making of an American Region

"The Culinarians is more than a collection of biographies. It is a celebration of lost voices--cooks, creators, and visionaries who paved the way for the food we eat today. With this book, Shields pulls back the curtain of modern cuisine in America to reveal a story we forgot existed."
— Dan Barber, chef and co-owner of Blue Hill and Blue Hill at Stone Barns, and author of The Third Plate