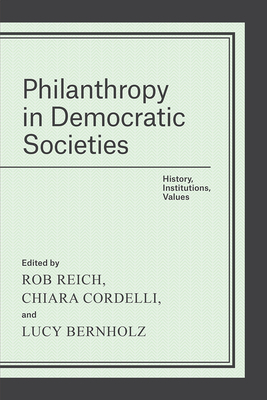 Philanthropy is everywhere. In 2013, in the United States alone, some $330 billion was recorded in giving, from large donations by the wealthy all the way down to informal giving circles. We tend to think of philanthropy as unequivocally good, but as the contributors to this book show, philanthropy is also an exercise of power. And like all forms of power, especially in a democratic society, it deserves scrutiny. Yet it rarely has been given serious attention. This book fills that gap, bringing together expert philosophers, sociologists, political scientists, historians, and legal scholars to ask fundamental and pressing questions about philanthropy’s role in democratic societies.

The contributors balance empirical and normative approaches, exploring both the roles philanthropy has actually played in societies and the roles it should play. They ask a multitude of questions: When is philanthropy good or bad for democracy? How does, and should, philanthropic power interact with expectations of equal citizenship and democratic political voice? What makes the exercise of philanthropic power legitimate? What forms of private activity in the public interest should democracy promote, and what forms should it resist? Examining these and many other topics, the contributors offer a vital assessment of philanthropy at a time when its power to affect public outcomes has never been greater.

Lucy Bernholz is a senior scholar at the Center on Philanthropy and Civil Society and codirector of the Digital Civil Society Lab at Stanford University.

“An important contribution to this emerging debate. While most writing on this subject is breathless or cynical, the ten chapters that make up Philanthropy in Democratic Societies, edited by Stanford political scientist Rob Reich, along with Chiara Cordelli and Lucy Bernholz, present a balanced picture of the history, theory, and role of philanthropy.”
— Wall Street Journal

“Philanthropy involves private persons using power to influence the public realm. To what extent is the exercise of this power compatible with the values of a liberal democratic state? This is the fundamental question that runs through this important and absorbing volume. The authors are an interdisciplinary group of scholars including sociologists, political scientists, historians, political philosophers, and legal scholars. Their essays have a coherence that is unusual in a collection of this kind; well written and accessible, they avoid the trap of disciplinary inwardness that can make such collections indigestible to the lay reader.”

"[A] central point made in the text is that philanthropy is embedded in webs of interaction with various powers, policies, organizations, and cultural norms.... [U]rges us to deepen our thinking about the purpose and place of philanthropy while thought leadership by practitioners offers action strategies to make their field and practice more inclusive and democratic."
— The Philanthropist

"The book is a cohesive integration of consistently well-developed chapters that take different routes to varying conclusions. The questions explored are not new, but the approaches to answering them reflect the influential arguments of those who know the United States can do better as well as the fresh eyes of new and emerging scholars...The work will be of great value in the classroom, as the basis for core readings in philanthropic studies and offers promise for achieving the editors’ purpose of engaging imaginations to advance future philanthropy scholarship."
— Journal of Public and Nonprofit Affairs

"This book asks how philanthropy relates to the state, to justice, to the law and the tax codes, and to its own history as a contested space between state and market. It wonders what we mean when we talk about philanthropy in democratic societies. . . . Its interdisciplinary focus is broad . . . and the essays are well integrated."
— Economics and Philosophy