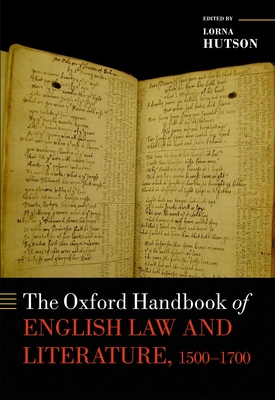 This Handbook triangulates the disciplines of history, legal history, and literature to produce a new, interdisciplinary framework for the study of early modern England. For historians of early modern England, turning to legal archives and learning more about legal procedure has seemed increasingly relevant to the project of understanding familial and social relations as well as political institutions, state formation, and economic change. Literary scholars and intellectual historians have also shown how classical forensic rhetoric formed the basis both of the humanist teaching of literary composition (poetry and drama) and of new legal epistemologies of fact-finding and evidence evaluation. In addition, the post-Reformation jurisdictional dominance of the common law produced new ways of drawing the boundaries between private conscience and public accountability. This Handbook brings historians, literary scholars, and legal historians together to build on and challenge these and similar lines of inquiry. Chapters in the Handbook consider the following topics in a variety of combinations: forensic rhetoric, poetics and evidence; humanist and legal learning; political and professional identities at the Inns of Court; poetry, drama, and visual culture; local governance and legal reform; equity, conscience, and religious law; legal transformations of social and affective relations (property, marriage, witchcraft, contract, corporate personhood); authorial liability (libel, censorship, press regulation); rhetorics of liberty, slavery, torture, and due process; nation, sovereignty, and international law (the British archipelago, colonialism, empire).

Lorna Hutson, Merton Professor of English Literature, University of Oxford Lorna Hutson is Merton Professor of English Literature at the University of Oxford. Educated in San Francisco, Edinburgh, and Oxford, she has taught at the Universities of St Andrews, UC Berkeley, Hull, and Queen Mary, London. She has served as Head of English at St Andrews (2008-11) and has held fellowships from the Folger, the Huntingdon, the Guggenheim, and the Leverhulme Trust. Her books include Thomas Nashe in Context (1989), The Usurer's Daughter (1994), and The Invention of Suspicion (2007). Circumstantial Shakespeare (2015) was based on the Oxford Wells Shakespeare Lectures in 2012. She has also edited Ben Jonson's Discoveries (1641) for the Cambridge Complete Works of Ben Jonson (2012) and written numerous articles on Renaissance topics.