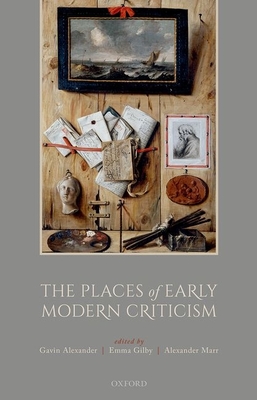 What is criticism? And where is it to be found? Thinking about literature and the visual arts is found in many places - in treatises, apologies, and paragoni; in prefaces, letters, and essays; in commentaries, editions, reading notes, and commonplace books; in images, sculptures, and built
spaces; within or on the thresholds of works of poetry and visual art. It is situated between different disciplines and methods. Critical ideas and methods come into England from other countries, and take root in particular locations - the court, the Inns of Court, the theatre, the great house, the
printer's shop, the university. The practice of criticism is transplanted to the Americas and attempts to articulate the place of poetry in a new world. And commonplaces of classical poetics and rhetoric serve both to connect and to measure the space between different critical discourses. Tracing
the history of the development of early modern thinking about literature and the visual arts requires consideration of various kinds of place - material, textual, geographical - and the practices particular to those places; it also requires that those different places be brought into dialogue with
each other. This book brings together scholars working in departments of English, modern languages, and art history to look at the many different places of early modern criticism. It argues polemically for the necessity of looking afresh at the scope of criticism, and at what happens on its margins;
and for interrogating our own critical practices and disciplinary methods by investigating their history.