Shakespeare's Money: How Much Did He Make and What Did This Mean? (Paperback) 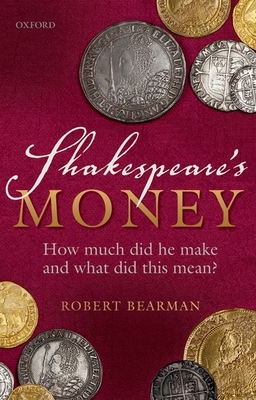 There is no doubting Shakespeare's literary genius, immortalised in his published work. However, statements along these lines are frequently followed by laments of how little is known about this life. This is true if we wish to know about Shakespeare's movements on even a month-by-month basis,
or about his working practices and relationships with his theatrical fellows. However, too great an emphasis on this dearth of material not only leads to ill-informed comment that this is somehow 'suspicious' but also tends to downgrade the importance of what material has survived, often dismissed
instead simply as evidence of his business dealings which have little bearing on his creative work. However, this material does at least help us to evaluate how successful Shakespeare was in earning a living in a profession which, in his day, was far from mainstream. By calculating his income from
theatrical sources and exploring how this affected his financial circumstances and his ability to invest for his and his family's security, we can come to a better understanding of his social standing at different periods in his life, the most obvious evidence to his late sixteenth- and early
seventeenth-century contemporaries of his success. Shakespeare undoubtedly died a man of comfortable means, but, as this book demonstrates, there is little to justify claims that he died possessed of great wealth. The circumstances of his daughters' marriages are a sufficient indication that he had
not achieved true gentlemanly status. Other evidence suggests that he had not broken convincingly into the ranks of leading figures even of a small market town. Moreover, following a period of increasing prosperity, these 'business records' also reflect a declining income during the last ten years
or so of his life and of his efforts to safeguard his assets. On the other hand, when compared with his father's business failure, mainly the result of a loss of credit, it is clear that, consciously or unconsciously, Shakespeare had the good sense or foresight not to over-reach himself.