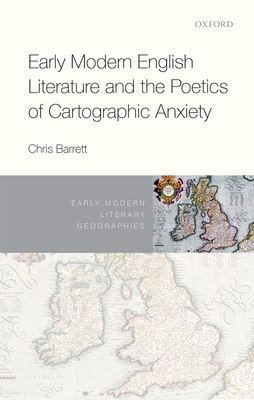 The Cartographic Revolution in the Renaissance made maps newly precise, newly affordable, and newly ubiquitous. In sixteenth-century Britain, cartographic materials went from rarity to household decor within a single lifetime, and they delighted, inspired, and fascinated people across the
socioeconomic spectrum. At the same time, they also unsettled, upset, disturbed, and sometimes angered their early modern readers. Early Modern English Literature and the Poetics of Cartographic Anxiety is the first monograph dedicated to recovering the shadow history of the many anxieties provoked
by early modern maps and mapping in the sixteenth and seventeenth centuries. A product of a military arms race, often deployed for security and surveillance purposes, and fundamentally distortive of their subjects, maps provoked suspicion, unease, and even hostility in early modern Britain (in ways not dissimilar from the anxieties provoked by global positioning-enabled
digital mapping in the twenty-first century). At the same time, writers saw in the resistance to cartographic logics and strategies the opportunity to rethink the way literature represents space--and everything else. This volume explores three major poems of the period--Edmund Spenser's The Faerie
Queene (1590, 1596), Michael Drayton's Poly-Olbion (1612, 1622), and John Milton's Paradise Lost (1667, 1674)--in terms of their vexed and vexing relationships with cartographic materials, and shows how the productive protest staged by these texts redefined concepts of allegory, description,
personification, bibliographic materiality, narrative, temporality, analogy, and other elemental components of literary representations.

Chris Barrett, Assistant Professor of English, Louisiana State University Chris Barrett is Assistant Professor of English at Louisiana State University, where she joined the faculty in 2012 after completing her doctoral degree in English at Harvard University. Her research and teaching interests include early modern English literature, especially Spenser and Milton;lyric and epic poetry; critical animal studies and ecocriticism; and geocritical approaches to literature. She is the author of articles and essays on Shakespeare, Spenser, and Milton, and her research has been supported by the Council on Research, the Newberry Library, the Folger Library, andDumbarton Oaks Museum & Collection.