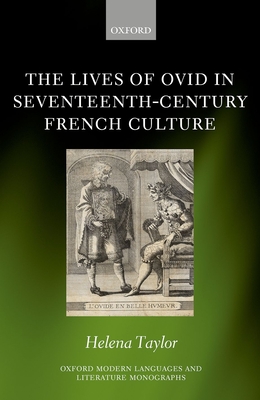 Seventeenth-century France saw one of the most significant 'culture wars' Europe has ever known. Culminating in the Quarrel of the Ancients and Moderns, this was a confrontational, transitional time for the reception of the classics. Helena Taylor explores responses to the life of the ancient
Roman poet, Ovid, within this charged atmosphere. To date, criticism has focused on the reception of Ovid's enormously influential work in this period, but little attention has been paid to Ovid's lives and their uses. Through close analysis of a diverse corpus, which includes prefatory Lives,
novels, plays, biographical dictionaries, poetry, and memoirs, this study investigates how the figure of Ovid was used to debate literary taste and modernity and to reflect on translation practice. It shows how the narrative of Ovid's life was deployed to explore the politics and poetics of exile
writing; and to question the relationship between fiction and history. In so doing, this book identifies two paradoxes: although an ancient poet, Ovid became key to the formulation of aspects of self-consciously 'modern' cultural movements; and while Ovid's work might have adorned the royal palaces
of Versailles, the poetry he wrote after being exiled by the Emperor Augustus made him a figure through which to question the relationship between authority and narrative. The Lives of Ovid in Seventeenth-Century French Culture not only nuances understanding of both Ovid and life-writing in this
period, but also offers a fresh perspective on classical reception: its paradoxes, uses, and quarrels.