West African Warfare in Bahaia and Cuba: Soldier Slaves in the Atlantic World, 1807-1844 (Past and Present Book) (Paperback) 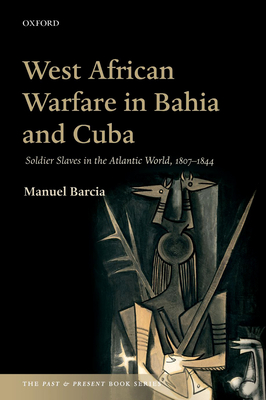 West African Warfare in Bahia and Cuba seeks to explain how a series of historical events that occurred in West Africa from the mid-1790s - including Afonja's rebellion, the Owu wars, the Fulani-led jihad, and the migrations to Egbaland - had an impact upon life in cities and plantations in
western Cuba and Bahia. Manuel Barcia examines the extent to which a series of African-led plots and armed movements that took place in western Cuba and Bahia between 1807 and 1844 were the result - or a continuation - of events that had occurred in and around the Yoruba and Hausa kingdoms in the
same period. Why did these two geographical areas serve as the theatre for the uprising of the Nagos, the Lucumis, and other West African men and women? The answer, Barcia argues, relates to the fact that plantation economies supported by unusually large numbers of African-born slaves from the same - or close -
geographical and ethnic heritage, which transformed the rural and urban landscape in western Cuba and Bahia. To understand why these two areas followed such similar social patterns it is essential to look across the Atlantic - it is not enough to repeat the significance of the African background of
Bahian and Cuban slaves. By establishing connections between people and events, with a special emphasis on their warfare experiences, Barcia presents a coherent narrative which spans more than three decades and opens a wealth of archival research for future study.

Manuel Barcia is Professor of Latin American History at the University of Leeds. He is also an Honorary Fellow at the Wilberforce Institute for the Study of Slavery and Emancipation at the University of Hull. He co-edits Atlantic Studies: Global Currents, and is the author of two books and severalarticles focusing on the history of the African Diaspora in Latin America and the Caribbean. He is also a frequent contributor to The Washington Spectator, Ihe Huffington Post, The Independent, and Al Jazeera in English. In 2014 he was awarded a prestigious Philip Leverhume Prize in History, givenevery year to researchers whose work has already attracted international recognition and whose future career is exceptionally promising.