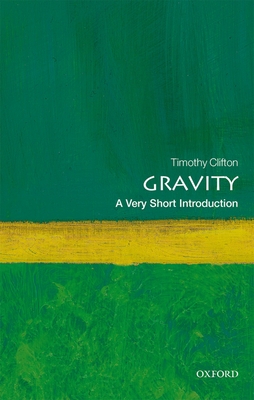 Gravity is one of the four fundamental interactions that exist in nature. It also has the distinction of being the oldest, weakest, and most difficult force to quantize. Understanding gravity is not only essential for understanding the motion of objects on Earth, but also the motion of all celestial objects, and even the expansion of the Universe itself. It was the study of gravity that led Einstein to his profound realizations about the nature of space and time and all astrophysical bodies within it. In this Very Short Introduction, Timothy Clifton looks at the development of our understanding of gravity since the early observations of Kepler and Newtonian theory. He discusses Einstein's theory of gravity, which now supplants Newton's, and shows how it allows us to understand why the frequency of light changes as it passes through a gravitational field, why GPS satellites need their clocks corrected as they orbit the Earth, and why the orbits of distant neutron stars speed up. Today, almost 100 years after Einstein published his theory of gravity, we have even detected the waves of gravitational radiation that he predicted. Clifton concludes by considering the testing and application of general relativity in astrophysics and cosmology, and looks at dark energy and efforts such as string theory to combine gravity with quantum mechanics. ABOUT THE SERIES: The Very Short Introductions series from Oxford University Press contains hundreds of titles in almost every subject area. These pocket-sized books are the perfect way to get ahead in a new subject quickly. Our expert authors combine facts, analysis, perspective, new ideas, and enthusiasm to make interesting and challenging topics highly readable.

Dr Timothy Clifton studied under John Barrow in Cambridge and is now a lecturer at Queen Mary, University of London. He is a specialist in gravitational physics. He has published many research papers on the subject, as well as co-authoring a cover story on gravity in Scientific American.