Tutankhamun and the Tomb That Changed the World (Hardcover) 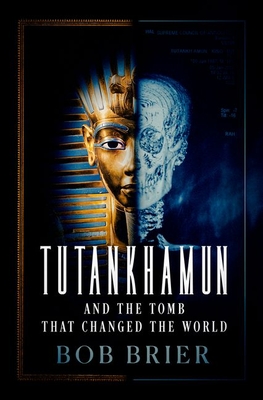 It is often thought that the story of Tutankhamun ended when the thousands of dazzling items discovered by Howard Carter and Lord Carnarvon were transported to the Egyptian Museum in Cairo and put on display. But there is far more to the boy-king's story. Tutankhamun and the Tomb that Changed the World explores the 100 years of research on Tutankhamun that have taken place since the tomb's discovery, from the several objects in the tomb made of meteoritic iron that came from outer space to new evidence that shows that Tutankhamun may actually have been a warrior who went into battle. Author Bob Brier also takes readers behind the scenes of the recent CT-scans of Tutankhamun's mummy to reveal more secrets of the young pharaoh. The book also illustrates the wide-ranging impact the discovery of Tutankhamun's tomb had on fields beyond Egyptology. Brier examines how the discovery of the tomb influenced Egyptian politics and contributed to the downfall of colonialism in Egypt. Outside Egypt, the modern blockbuster exhibitions that raise great sums of monies for museums around the world all began with Tutankhamun, as did the idea of documenting every object discovered in place before it was moved. And to a great extent, the modern fascination with ancient Egypt DL Egyptomania DL was also greatly promoted by the Tutmania that surrounded the discovery of the tomb. Deeply informed by the latest research and presented in vivid detail, Tutankhamun and the Tomb that Changed the World is a compelling introduction to the world's greatest archaeological discovery.

Bob Brier is Senior Research Fellow at the C.W. Post Campus of Long Island University, whose previous book include The Murder of Tutankhamun, Egyptomania, Ancient Egypt, and, with Jean-Pierre Houdin, The Secret of the Great Pyramid. Recognized as one of the world's foremost Egyptologists, he conducts pioneering research in mummification practices and has investigated some of the world's most famous mummies, including King Tut.