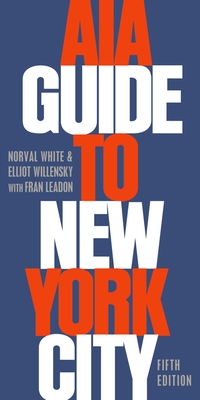 By Norval White, Elliot Willensky, Fran Leadon
$39.95
On Our Shelves

Hailed as extraordinarily learned (New York Times), blithe in spirit and unerring in vision, (New York Magazine), and the definitive record of New York's architectural heritage (Municipal Art Society), Norval White and Elliot Willensky's book is an essential reference for everyone with an interest in architecture and those who simply want to know more about New York City.
First published in 1968, the AIA Guide to New York City has long been the definitive guide to the city's architecture. Moving through all five boroughs, neighborhood by neighborhood, it offers the most complete overview of New York's significant places, past and present. The Fifth Edition continues to include places of historical importance--including extensive coverage of the World Trade Center site--while also taking full account of the construction boom of the past 10 years, a boom that has given rise to an unprecedented number of new buildings by such architects as Frank Gehry, Norman Foster, and Renzo Piano. All of the buildings included in the Fourth Edition have been revisited and re-photographed and much of the commentary has been re-written, and coverage of the outer boroughs--particularly Brooklyn--has been expanded.
Famed skyscrapers and historic landmarks are detailed, but so, too, are firehouses, parks, churches, parking garages, monuments, and bridges. Boasting more than 3000 new photographs, 100 enhanced maps, and thousands of short and spirited entries, the guide is arranged geographically by borough, with each borough divided into sectors and then into neighborhood. Extensive commentaries describe the character of the divisions.
Knowledgeable, playful, and beautifully illustrated, here is the ultimate guided tour of New York's architectural treasures. Acclaim for earlier editions of the AIA Guide to New York City: An extraordinarily learned, personable exegesis of our metropolis. No other American or, for that matter, world city can boast so definitive a one-volume guide to its built environment.
-- Philip Lopate, New York Times Blithe in spirit and unerring in vision.
-- New York Magazine A definitive record of New York's architectural heritage... witty and helpful pocketful which serves as arbiter of architects, Baedeker for boulevardiers, catalog for the curious, primer for preservationists, and sourcebook to students. For all who seek to know of New York, it is here. No home should be without a copy.
-- Municipal Art Society There are two reasons the guide has entered the pantheon of New York books. One is its encyclopedic nature, and the other is its inimitable style--'smart, vivid, funny and opinionated' as the architectural historian Christopher Gray once summed it up in pithy W & W fashion.
-- Constance Rosenblum, New York Times A book for architectural gourmands and gastronomic gourmets.
-- The Village Voice