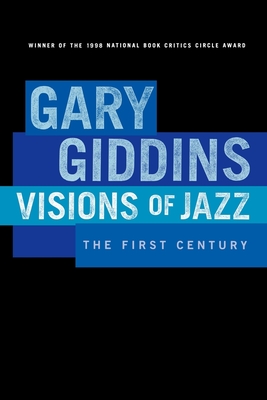 "As a teenager who was starting to become obsessed with music, I accidentally came across this book at my hometown's public library. Looking back, I can't believe my luck. Not only is Visions of Jazz an ideal introduction to the music in question, it's an equally ideal introduction to the craft of cultural criticism. Giddins maintains an open mind without diminishing his discerning ear; he recognizes that the critic's role is to report on both what you're hearing and where it came from. The book is not a linear history of jazz, but a collection of essays on most of its major figures—the format suggests that this is a canon that remains subject to revision. The prose, which is not an afterthought, flows with the logic and wit of a great solo."

Poised to become a classic of jazz literature, Visions of Jazz: The First Century offers seventy-nine chapters illuminating the lives of virtually all the major figures in jazz history. From Louis Armstrong's renegade-style trumpet playing to Sarah Vaughan's operatic crooning, and from the
swinging elegance of Duke Ellington to the pioneering experiments of Ornette Coleman, jazz critic Gary Giddins continually astonishes the reader with his unparalleled insight. Writing with the grace and wit that have endeared his prose to Village Voice readers for decades, Giddins also widens the
scope of jazz to include such crucial American musicians as Irving Berlin, Rosemary Clooney, and Frank Sinatra, all primarily pop performers who are often dismissed by fans and critics as mere derivatives of the true jazz idiom. And he devotes an entire quarter of this landmark volume to young,
still-active jazz artists, boldly expanding the horizons of jazz--and charting and exploring the music's influences as no other book has done.

Gary Giddins is the jazz critic for the Village Voice. He lives in New York City.