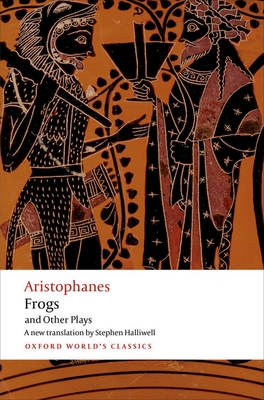 Aristophanes is the only surviving representative of Greek Old Comedy, an exuberant form of festival drama which flourished in Athens during the fifth century BC. One of the most original playwrights in the entire Western tradition, his comedies are remarkable for their brilliant combination of fantasy and satire, their constantly inventive manipulation of language, and their use of absurd characters and plots to expose his society's institutions and values to the bracing challenge of laughter. This vibrant collection of verse translations of Aristophanes' works combines historical accuracy with a sensitive attempt to capture the rich dramatic and literary qualities of Aristophanic comedy. The volume presents Clouds, with its famous caricature of the philosopher Socrates; Women at the Thesmophoria (or Thesmophoriazusae), a work which mixes elaborate parody of tragedy with a great deal of transvestite burlesque; and Frogs, in which the dead tragedians Aeschylus and Euripides engage in a vituperative contest of 'literary criticism' of each other's plays. Featuring expansive introductions to each play and detailed explanatory notes, the volume also includes an illuminating appendix, which provides information and selected fragments from the lost plays of Aristophanes.

Stephen Halliwell is Professor of Greek and Wardlaw Professor of Classics at the University of St Andrews. He has taught in the universities of Oxford, London, Cambridge, and Birmingham, and held visiting professorships in Belgium, Canada, Italy, and the USA. His extensive publications on Greek literature, philosophy, and culture include two prize-winning books: Greek Laughter: A Study of Cultural Psychology from Homer to Early Christianity (Criticos Prize 2008), and The Aesthetics of Mimesis: Ancient Texts and Modern Problems (Premio Europeo d'Estetica, 2008). His book Between Ecstasy and Truth: Interpretations of Greek Poetics from Homer to Longinus was published by Oxford University Press in 2011. He is a Fellow of both the British Academy and the Royal Society of Edinburgh.