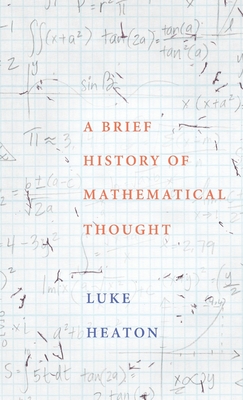 Advertisements for the wildly popular game of Sudoku often feature the reassuring words, no mathematical knowledge required. In fact, the only skill Sudoku does require is the use of mathematical logic. For many people, anxiety about math is so entrenched, and grade school memories so haunting, that these disclaimers - though misleading - are necessary to avoid intimidating potential buyers. In A Brief History of Mathematical Thought, Luke Heaton provides a compulsively readable history that situates mathematics within the human experience and, in the process, makes it more accessible. Mastering math begins with understanding its history. Heaton's book therefore offers a lively guide into and through the world of numbers and equations-one in which patterns and arguments are traced through logic in the language of concrete experience. Heaton reveals how Greek and Roman mathematicians like Pythagoras, Euclid, and Archimedes helped shaped the early logic of mathematics; how the Fibonacci sequence, the rise of algebra, and the invention of calculus are connected; how clocks, coordinates, and logical padlocks work mathematically; and how, in the twentieth century, Alan Turing's revolutionary work on the concept of computation laid the groundwork for the modern world. A Brief History of Mathematical Thought situates mathematics as part of, and essential to, lived experience. Understanding it does not require the application of various rules or numbing memorization, but rather a historical imagination and a view to its origins. Moving from the origin of numbers, into calculus, and through infinity, Heaton sheds light on the language of math and its significance to human life.

Luke Heaton graduated with first class honours in Mathematics at the University of Edinburgh before going on to take an MSc in Mathematics and the Logical Foundations of Computer Science at the University of Oxford. After spending a year making mathematically inspired art, he gained a BA in Architecture at the University of Westminster, before working as an architectural assistant at One20. He then returned to Oxford, completing a DPhil in Mathematical Biology. He is currently employed by the University of Oxford as a postgraduate research assistant in the Department of Plant Sciences. Luke's research interests lie in mathematics and the mathematical modelling of biological phenomena, the history and philosophy of mathematics, morphogenesis and biological pattern formation, network theory, biophysics, and the statistical properties of efficient transport networks. He has published several papers on the biophysics of growth and transport in fungal networks.