Scarlet A: The Ethics, Law, and Politics of Ordinary Abortion (Paperback) 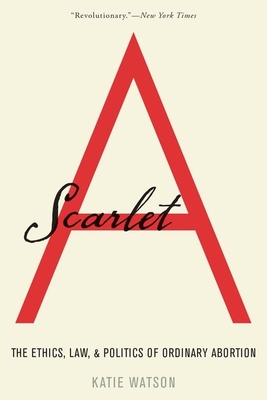 Winner of the NCTE George Orwell Award for Distinguished Contribution to Honesty and Clarity in Public Language Although Roe v. Wade identified abortion as a constitutional right in1973, it still bears stigma--a proverbial scarlet A. Millions of Americans have participated in or benefited from an abortion, but few want to reveal that they have done so. Approximately one in five pregnancies in the US ends in
abortion. Why is something so common, which has been legal so long, still a source of shame and secrecy? Why is it so regularly debated by politicians, and so seldom divulged from friend to friend? This book explores the personal stigma that prevents many from sharing their abortion experiences with
friends and family in private conversation, and the structural stigma that keeps it that way. In public discussion, both proponents and opponents of abortion's legality tend to focus on extraordinary cases. This tendency keeps the national debate polarized and contentious, and keeps our focus on the cases that occur the least. Professor Katie Watson focuses instead on the cases that happen
the most, which she calls ordinary abortion. Scarlet A gives the reflective reader a more accurate impression of what the majority of American abortion practice really looks like. It explains how our silence around private experience has distorted public opinion, and how including both ordinary
abortion and abortion ethics could make our public exchanges more fruitful. In Scarlet A, Watson wisely and respectfully navigates one of the most divisive topics in contemporary life. This book explains the law of abortion, challenges the toxic politics that make it a public football and private secret, offers tools for more productive private exchanges, and leads the way
to a more robust public discussion of abortion ethics. Scarlet A combines storytelling and statistics to bring the story of ordinary abortion out of the shadows, painting a rich, rarely seen picture of how patients and doctors currently think and act, and ultimately inviting readers to tell their
own stories and draw their own conclusions. The paperback edition includes a new preface by the author addressing new cultural developments in abortion discourse and new legal threats to reproductive rights, and updated statistics throughout.

Katie Watson is an award-winning Associate Professor of Medical Social Sciences, Medical Education, and Obstetrics & Gynecology at Northwestern University's Feinberg School of Medicine, where she has taught bioethics, medical humanities, and constitutional law to medical students and mastersstudents for fifteen years. Professor Watson is also a lawyer who began her career clerking in the federal judiciary and practicing public interest law, and in 2017-2018 she worked part-time as Senior Counsel to the Women's and Reproductive Rights Project of the ACLU of Illinois. Professor Watsonhas been a Board member of the American Society for Bioethics and Humanities, and she is currently on the Board of the National Abortion Federation, and a Bioethics Advisor to and Member of the National Medical Council of the Planned Parenthood Federation of America.