The Girl You Left Behind: A Novel (Paperback) 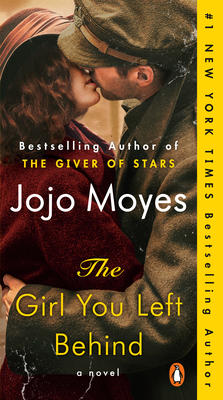 From the New York Times bestselling author of The Giver of Stars, a sweeping bestseller of love and loss, deftly weaving two journeys from World War I France to present day London.

Paris, World War I. Sophie Lefèvre must keep her family safe while her adored husband, Édouard, fights at the front. When their town falls to the Germans, Sophie is forced to serve them every evening at her hotel. From the moment the new Kommandant sets eyes on Sophie’s portrait—painted by her artist husband—a dangerous obsession is born.

Almost a century later in London, Sophie’s portrait hangs in the home of Liv Halston, a wedding gift from her young husband before his sudden death. After a chance encounter reveals the portrait’s true worth, a battle begins over its troubled history and Liv’s world is turned upside all over again.

Jojo Moyes is the #1 New York Times bestselling author of The Giver of Stars, Still Me, Paris for One and Other Stories, After You, One Plus One, The Girl You Left Behind, Me Before You, The Last Letter from Your Lover, The Horse Dancer, Silver Bay, The Ship of Brides, and The Peacock Emporium. The Last letter From Your Lover will be released as a major motion picture by Netflix in July. She lives with her husband and three children in Essex, England.

"Jojo Moyes expertly weaves a bittersweet tale in this irresistible novel, taking careful interest in the dark corners that exist within great love stories, and the trickiness of simple happy endings. A-"
—Entertainment Weekly

“Moyes writes delicious plots, with characters so clearly imagined they leap off the pages in high-definition prose. . . . Clever plot turns make for a satisfying ending . . .  Moyes brings fresh strokes to this story about the power of art and love to transcend what imprisons us. Romantics looking for a story set amid the politics of plundered art couldn't do much better than The Girl You Left Behind.”
—USA Today (3 1/2 stars)

"Jojo Moyes builds on her strengths in this moving and accomplished new novel. As she did in the best-selling Me Before You, she asks readers to think in fresh ways about a morally complex issue. . . . The Girl You Left Behind is strong, provocative, satisfying fiction."
—The Washington Post

"'In this moving paean to daring, determination and perspicacity, Moyes keeps the reader guessing down to the last hankie."
—Los Angeles Times

"In her latest heart tugger, Jojo Moyes deftly weaves the story of newlyweds in WWI France with that of a young widow in today’s London."
—Parade

"Moyes (Me Before You) has created a riveting depiction of a wartime occupation that has mostly faded from memory. Liv and Sophie are so real in their faults, passion, and bravery that the reader is swept along right to the end. This one is hard to put down!"
—Library Journal (starred review)

"Moyes (Me Before You, 2012) writes with such clarity that one can almost see the eponymous 100-year-old painting at the center of her wonderful new novel. . . .  an uncommonly good love story."
—Booklist