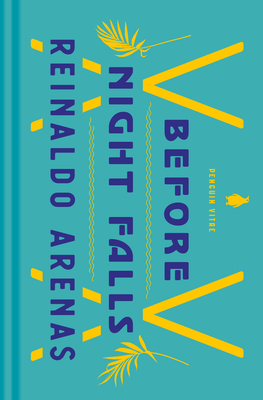 This is a beautiful memoir by one of my favorite novelists. Moving from a rural childhood to a life as member of Castro’s revolutionary army to detailed accounts of the Cuban literati and finally transitioning to a struggle against the plague of New York City in the 80’s - always with a poet’s eye. Throughout these radical transitions Arenas consistently writes and has sex...lots of sex. Even while fleeing the agents of Fidel who chase him into the woods he finds a way to cavort with hot young Cuban men and rewrite seized novels. Sodomy, war, Castro, this is a great gateway drug for his lengthy, beautiful, novels.

The acclaimed memoir of homosexual Cuban author Reinaldo Arenas chronicling his tumultuous yet luminary life, from his impoverished upbringing in Cuba to his imprisonment at the hands of a Communist regime.

The astonishing memoir by visionary Cuban writer Reinaldo Arenas "is a book above all about being free," said The New York Review of Books--sexually, politically, artistically. Arenas recounts a stunning odyssey from his poverty-stricken childhood in rural Cuba and his adolescence as a rebel fighting for Castro, through his supression as a writer, imprisonment as a homosexual, his flight from Cuba via the Mariel boat lift, and his subsequent life and the events leading to his death in New York. In what The Miami Herald calls his "deathbed ode to eroticism," Arenas breaks through the code of secrecy and silence that protects the privileged in a state where homosexuality is a political crime. Recorded in simple, straightforward prose, this is the true story of the Kafkaesque life and world re-created in the author's acclaimed novels.

Penguin Classics launches a new hardcover series with five American classics that are relevant and timeless in their power, and part of a dynamic and diverse landscape of classic fiction and nonfiction from almost seventy-five years of classics publishing. Penguin Vitae provides readers with beautifully designed classics that have shaped the course of their lives, and welcomes new readers to discover these literary gifts of personal inspiration, intellectual engagement, and creative originality.

Reinaldo Arenas was born in Cuba in 1943. In the 1970s, he was imprisoned multiple times for his openly homosexual lifestyle, which clashed with the beliefs of the Communist regime. Despite the hardships imposed during his imprisonment, Arenas produced a significant body of work, including his Pentagonia, a set of five novels written between the 1960s and 1980s that comprise a "secret history" of post-revolutionary Cuba: Singing from the Well, Farewell to the Sea, Palace of the White Skunks, Color of Summer, and The Assault. In 1980, he was one of 120,000 Cubans who arrived in the United States on the Mariel boatlift. Arenas settled in New York where he lived until his death from AIDS ten years later.

"Dolores Koch's translation is a great achievement. She is not only accurate and faithful to the original but she even captures Arenas's flashes of lyricism and melancholy...Reading Arenas is like witnessing a bare consciousness in the process of assimilating the most universal, but powerful, human experiences and turning them into literature. Because of this, "Before Night Falls" is crucial to understanding his works. But, more important, it is a record of human cruelty and the toils of one individual to survive them." -- The New York Times

"A document of a particular and disturbing honesty by one of the truly great writers to come out of Latin America." ― Chicago Tribune

"One of the most searing satirical writers of the 20th century, a worthy successor to Aristophanes and Swift." -- Jaime Manrique ― Village Voice


"In this powerful memoir of passions both personal and political, Cuban author Arenas describes his voyage from peasant poverty to his oppression as a dissident writer and homosexual." -- Publishers Weekly


"A last testament that resonates with passion for the freedom of the human spirit and for the author's beloved Cuba: a distinguished addition to the literature of dissent and exile." -- Kirkus Reviews