The Corpse Exhibition: And Other Stories of Iraq (Paperback) 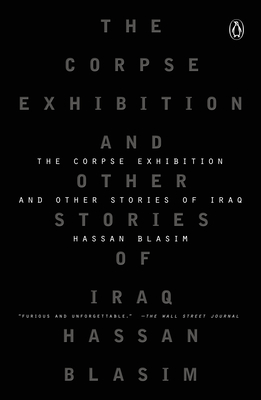 The first major literary work about the Iraq War from an Iraqi perspective—by an explosive new voice hailed as “perhaps the best writer of Arabic fiction alive” (The Guardian)—The Corpse Exhibition shows us the war as we have never seen it before. Here is a world not only of soldiers and assassins, hostages and car bombers, refugees and terrorists, but also of madmen and prophets, angels and djinni, sorcerers and spirits.

Blending shocking realism with flights of fantasy, The Corpse Exhibition offers us a pageant of horrors, as haunting as the photos of Abu Ghraib and as difficult to look away from, but shot through with a gallows humor that yields an unflinching comedy of the macabre. Gripping and hallucinatory, this is a new kind of storytelling forged in the crucible of war.

Hassan Blasim was born in Baghdad in 1973 and studied at the Baghdad Academy of Cinematic Arts. A critic of Saddam Hussein's regime, he was persecuted and in 1998 fled Baghdad to Iraqi Kurdistan, where he made films and taught filmmaking under the pseudonym Ouazad Osman. In 2004, a year into the war, he fled to Finland, where he now lives. A filmmaker, poet, and fiction writer, he has published in various magazines and anthologies and is a coeditor of the Arabic literary website www.iraqstory.com. His fiction has twice won the English PEN Writers in Tranlsation award and has been translated into Finnish, Polish, Spanish, and Italian. In 2012 a heavily edited version of his stories was finally published in Arabic and was immediately banned in Jordan.

“Arresting, auspicious . . . Well-plotted, blackly comic . . . Sharp, tragicomic moments . . . persist in memory. . . . Its opening story [features] a terrorist middle manager who wouldn’t be out of place in one of George Saunders’s workplace nightmares. . . . ‘The Song of the Goats’ [is] a cunning gem. . . . If a short story could break the heart of a rock, this might just be the one. . . . The collection’s last story is so complicatedly good [with] an ending worthy of Rod Serling. Mr. Blasim’s stories owe more than a little of their dream logic to [Carlos] Fuentes and Serling, with maybe some Julio Cortázar thrown in. . . . Their sequence imparts a mounting novelistic power.” —The New York Times

“Brilliant and disturbing . . . Bitter, furious and unforgettable, the stories seem to have been carved out of the country’s suppurating history like pieces of ragged flesh.” —The Wall Street Journal

“Superb . . . The existence of this book is reason for hope, proof of the power of storytelling.” —The Boston Globe

“Visceral, full of horror and absurdity . . . Blasim is an Iraqi Kafka with a touch of Edgar Allan Poe thrown in, and his pen spares no one who commits atrocities, Americans and Iraqis alike.” —Brian Castner, “This Week’s Must Read” on NPR’s Weekend All Things Considered

“Perhaps the greatest writer of Arabic fiction alive . . . [His stories are] crisp and shocking . . . cruel, funny and unsettling [with] hooks and twists that will lodge in any mind.” —The Guardian

“A modern classic of post-war witness, elegy and revolt . . . Think Irvine Welsh in post-war and post-Saddam Baghdad, with the shades of Kafka and Burroughs also stalking these sad streets. . . . [Blasim] depict[s] a pitiless era with searing compassion, pitch-black humour and a sort of visionary yearning for a more fully human life. . . . Amid all the scars of combat, these stories seek and find comedy, magic, affection and even an urge towards transcendence.” —The Independent

“Line for line and paragraph for paragraph, Blasim writes more interestingly than [Phil] Klay. . . . His content is more strange and striking. . . . Blasim is an artist of the horrendously extraordinary. . . . [His] stories are almost Hemingwayesque in their stripped-down style and content. . . . Blasim has a sense of humor. He must have learned his jokes from the Grim Reaper.” —William T. Vollmann, Bookforum

“Brilliant . . . [A] much-needed perspective on a war-ravaged country . . . It is a slim but potent collection and will go a long way to making Blasim’s name in American literary circles. . . . Blasim plants his flag squarely in the tradition of Kafka, Borges, and other writers of surreal and otherwise metaphysical fiction. . . . He has a vital subject and takes it seriously: Iraq and its people. . . . He has written a fresh and disturbing book, full of sadness and humor, alive with intelligent contradiction.” —The Daily Beast

“A bravura collection . . . Mind-bendingly bizarre . . . Blasim . . . lights his charnel house with guttering flares of wit. . . . [Be] ready to be shocked and awed by these pitch-black fairytales.” —The National

“Unforgettable . . . Very important . . . [Blasim’s stories] could only come out of firsthand experience of the war.” —Flavorwire, 10 Must-Read Books for February

“A vivid, sometimes lurid picture of wartime Iraq [by] one of the most important Arabic-language storytellers . . . Violent, bleak and occasionally beautiful . . . Dark and sometimes bitterly funny . . . Most of these stories feel ready to collapse or explode at any moment. . . . The reader walks on solid ground one moment, and the next the ground gives way—sending him tumbling into deep, otherworldly holes.” —Chicago Tribune

“A blunt and gruesome look at the Iraq War from the perspective of Iraqi citizens . . . Blasim’s stories give shape to an absurdist world in which brutal violence is commonplace. . . . [For] fans of Roberto Bolaño, Junot Díaz, and other writers who employ magical realism when describing grim realities.” —The Huffington Post

“Shocking, urgent, vital literature. I will be surprised if another work of fiction this Important, with a capital I, gets published all year. If you’re human, and you are even remotely aware that a war was recently fought in Iraq, you ought to read The Corpse Exhibition.” —Brian Hurley, Fiction Advocate

“Startling and brutal . . . One of the most brutal accounts of man’s cruelty to man I have ever read.” —Helen Benedict, Guernica

“Corruscating, lapidary, deeply unsettling, Hassan Blasim’s stories are not only without equal, they are a necessary reminder that there is an other side waiting to give voice to the tragic costs of these unnecessary, imposed wars.” —Joydeep Roy-Bhattacharya, author of The Watch and The Storyteller of Marrakesh

“Blasim pitches everyday horror into something almost gothic. . . . [His] taste for the surreal can be Gogol-like.” —The Independent

“Stunningly powerful . . . Brutal, vulgar, imaginative, and unerringly captivating . . . Every story ends with a shock, and none of them falter. A searing, original portrait of Iraq and the universal fallout of war.” —Publishers Weekly, starred review

“Powerful, moving and deeply descriptive . . . All the stories share a complexity and depth that will appeal to readers of literary fiction [and] fans of Günter Grass, Gabriel García Márquez or Jorge Luis Borges.” —Kirkus Reviews

“Excellent . . . Like hollow shards of laughter echoing in the dark . . . Blasim moves adeptly between surreal, internalised states of mind and ironic commentary on Islamic extremism and the American invasion. . . . Extraordinary.” —Metro

“Iraq’s story must still be told, and we need Iraqi voices like Blasim’s to tell it.” —More Intelligent Life

“Clever and memorable . . . Agreeably creepy . . . Move[s] effectively between surreal and magical. . . . Blasim’s use of the real-life horrors of Iraq [and] the fanciful spins he puts on events make the horrors bearable—even as these also often become more chilling.” —The Complete Review

“The first major literary work about the Iraq War as told from an Iraqi perspective . . . Starkly visual . . . Luridly macabre . . . Eloquent, moving . . . Effortlessly powerful and affecting . . . More surreally gruesome than the goriest of horror stories . . . Hassan Blasim is very much a writer in [the] Dickensian mould. . . . These are tales that demand to be told.” —CityLife.co.uk

“Savagely comic . . . A corrosive mixture of broken lyricism, bitter irony and hyper-realism . . . I can’t recommend highly enough ‘The Corpse Exhibition,’ ‘The Market of Stories’ or ‘The Nightmares of Carlos Fuentes.’ ” —The M John Harrison blog

“[Blasim is] a master of metaphor who is now developing his own dark philosophy [in] stories of profane lyricism, skewed symbolism and macabre romanticism. . . . [His work is] Bolaño-esque in its visceral exuberance, and also Borgesian in its gnomic complexity.” —The Guardian

“[A] chillingly titled collection . . . Part Kafka, part Orwell, part magical realism, the stories . . . are so powerfully written that even as they wrenched me from sympathy to horror, from reality to fantasy, they left me enlightened, moved, and infuriated all at once. . . . A mirror of war everywhere.” —Helen Benedict, Lit Hub