Transit Maps of the World: The World's First Collection of Every Urban Train Map on Earth (Paperback) 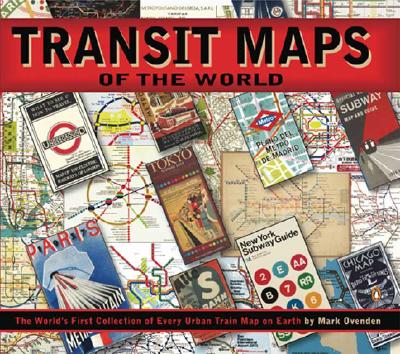 Transit Maps of the World is the first and only comprehensive collection of historic and current maps of every rapid-transit system on earth. Using glorious, colorful graphics, Mark Ovenden traces the history of mass transit-including rare and historic maps, diagrams, and photographs, some available for the first time since their original publication. Transit Maps is the graphic designer's new bible, the transport enthusiast's dream collection, and a coffee-table essential for everyone who's ever traveled in a city.

Born in London in 1963, Mark Ovenden evinced an early fascination with trains and TV that has remained with him over the course of his life. Following college he pursued a number of positions in local government and on the radio promoting progressive attitudes towards gay issues before getting a full time job at BBC Radio 1 as a producer. In 1998 he joined MTV as a freelance Music Programmer, where he gave birth to another production company which went on to produce shows for Atlantic252. There Mark was later taken on as a presenter of a weekly record review show with Chris Coco and as their specialist programmes producer and later breakfast newsreader.

When Atlantic252 closed down Mark moved to Ministry Of Sound where he helped set up their DAB station, Ibiza unit and later, as Head of Radio there, ran a popular FM version of the station. Mark moved into consultancy after this working with Purple radio and the DRG.

In 2002 while still working in his spare time on his book project he moved to a fledgling TV channel as Channel Manager.

Mark Ovenden's Metro Maps of the World was published in November 2003 to great critical acclaim. It has since been re-written and updated for the American market and is now published by Penguin as Transit Maps of the World. Mark currently resides in Paris where he is researching his next book on a century of cartography of the Paris Metro Map. He is also working on several other book projects, a radio sit-com, and a TV travel show.

"Ovenden does what no other design history book has ever done. Transit Maps of the World is a must-have"
-The New York Times Book Review

"This book is the stuff that dreams are made of"
-Newsday

"A fabulous collection. These maps are almost works of art, and can kindle a remembrance of a past trip or a dream of a future journey"
-Seattle Times

"Even if you are not a "map person" this book makes it so easy to experience the unique perspective of rail-based transit. Artistically a treat with its interesting colors, shapes and design; it's a coffee table essential. Ovenden brings a unique perspective to maps and to travel in general. Transit Maps of the World is a must-read for the literary traveller"
-Literary Traveller.com

"...look no further for the next must-have book"
-Very Short List

"The sort of book you couldn't imagine you needed until you got it and now you can't imagine how you could do without it . . . It's fantastic!"
-Robert Elms, BBC London

"Like a CondT Nast Traveler magazine for jetsetters with subterranean tendencies."
-Metro

"A beautifully illustrated study of the plans that help passengers navigate the world's metropolitan railway systems."
-The Times, London