The Ninety-Five Theses and Other Writings (Paperback) 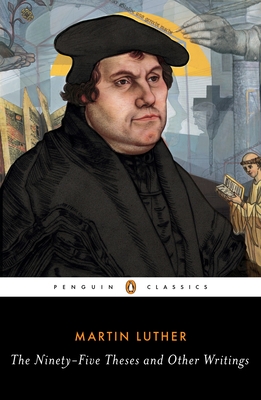 For the 500th anniversary of the Reformation, a new translation of Martin Luther's most famous works by leading Luther scholar and pastor William Russell

This volume contains selections from Martin Luther's most evocative and provocative writings, freshly translated, for the 21st century. These documents, which span the Reformer's literary career, point to the enduring and flexible character of his central ideas. As Luther's reform proposals emerged, they coalesced around some basic priorities, which he delivered to wide-ranging audiences--writing for children, preaching in congregations, formulating academic treatises, penning letters to family and friends, counter-punching critics, summarizing Biblical books, crafting confessions of faith, and more. This book demonstrates that range and provides entry points, for non-specialists and specialists alike, into the thought and life of the epoch-defining, fascinating, and controversial Martin Luther. With attention to the breadth of his literary output, it draws from his letters, sermons, popular writings, and formal theological works. This breadth allows readers to encounter Luther the man: the sinner and the saint, the public activist and the private counselor, the theologian and the pastor. These writings possess a practical, accessible arc, as Luther does not write only for specialists and church officials, but he applies his chief insights to the "real-life" issues that faced his rather wide variety of audiences.

William Russell, pastor and scholar, serves Augustana Lutheran Church, Minneapolis, Minnesota, where he investigates the life and work of Martin Luther. With the Ph.D. from the University of Iowa and the M.Div. from Luther Seminary, Russell has authored/edited eight books and dozens of articles. A sought-after speaker, he has addressed audiences from Canada to Brazil, Malaysia to Puerto Rico, Oslo to Cape Town. He currently serves as president of the American Academy of Religion, Upper Midwest Region. Married to Ann Svennungsen, they have three grown children and two grandchildren.

“This edition of well-chosen writings of Martin Luther is to be commended for demonstrating the richness of his thought and the relevance of this thought for 21st century religious discourse. Well known and not so well known writings are offered in an excellent English translation.”
—Hans J. Hillerbrand, Professor Emeritus of Religion, Duke University

“William Russell’s careful translation and poignant introduction bring a freshness to these historic texts, which are often referenced and too rarely read. At the 500th Anniversary of the Reformation, this volume makes it easy to sit down, open the cover and discover anew what mattered to Luther then and what matters to many now.”
—Patricia Lull, Bishop of Saint Paul Area Synod, Evangelical Lutheran Church in America

“Judiciously selected writings of the Reformer, crisply translated and chronologically presented by Luther scholar William R. Russell, just in time for the 500th anniversary of the Lutheran Reformation. Beginning with the document that ignited the Reformation, “The Ninety-Five Theses” and concluding with a sermon from 1539, Russell has provided a fine anthology of Luther’s literary legacy that will lend itself for use in classrooms and congregations. It will also serve a broader audience interested in gaining insights into the Reformation as Russell provides primary texts as we are given a sampling of polemical and pastoral writings (including sermons and letters) as well as his theological and confessional documents. Each entry is accompanied with a succinct but careful introduction providing the reader with its historical context as well as a thematic orientation to Luther’s thought.”
—John T. Pless, Assistant Professor of Pastoral Ministry and Missions, Concordia Theological Seminary

“Meet the classic Martin Luther—defiant in his challenge to earthly authority, disarmingly simple in his faith, and utterly pastoral in his love of the gospel. His words are messages in a bottle from his fractured world to our own. Russell's judicious selections and thoughtful introduction constitute a personal invitation to the general reader. I can think of no better way to encounter the Great Reformer—again.”
—Richard Lischer,  Duke Divinity School

“The writings of Martin Luther comprise more than 100 massive volumes. How to make him accessible, especially in the exciting anniversary year of 2017? William Russell’s judicious selection of shorter texts drawn from the full span of Luther’s almost-forty year career as a pastor and theologian answers that question compellingly. The collection provided here includes such standards as the 95 Theses, the Heidelberg Disputation, and the Small Catechism. Also included are such lesser known texts as the letter to Philip Melanchthon in which Luther’s controversial advice to “sin boldly” is found, a number of sermons and shorter tracts that show Luther’s pastoral side, as well as a few texts that highlight his swashbuckling style of theological argument. Freshly translated here, these texts are also expertly introduced in an informal style that eases the reader’s way into Luther’s world. The result is a one-volume collection that will work exceptionally well for college level courses, and which will be a treasure for interested readers of all kinds as well. A fine work!”
—Mickey L. Mattox, Marquette University

“Russell’s translations are smooth and readable, making this volume an excellent entry point for the Luther novice. He also provides a useful glossary of names along with his own bibliographic notes and a list of suggested further reading. This is an excellent collection of writings by Martin Luther, freshly translated by a leading scholar in the field.”
—Publishers Weekly